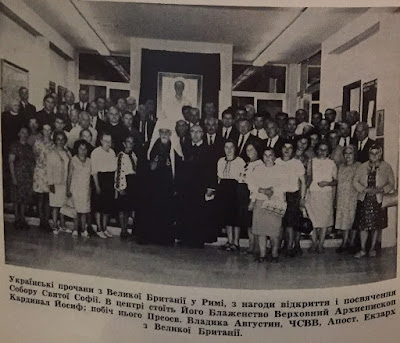 by Engineer Vasyl Oleskiw (1924–2016)
[Василь Олеськів, “У поклоні Верховнону,”
in Наша Церква, vol. 18, no. 1 [90] (January–March 1970), p. 7–9.]
On Thursday, 2 October 1969, Ukrainian pilgrims from Great Britain, together with their Bishop Kyr Augustine Hornyak and three parish priests, arrived in Rome for the solemn consecration of the noble Sobor of Saint Sophia. On that day, they experienced perhaps the greatest and most moving moments of their visit to the Eternal City. On that day, at 3:30 in the afternoon, they were received in a private audience by His Beatitude Major-Archbishop Cardinal Yosyf, at the Ukrainian Catholic University of Pope Saint Clement. On that day they had the joy to personally meet with our Chief Hierarch, Confessor of the Faith and of the Ukrainian nation, to touch the same hand which, not long ago, had been tortured, to exchange a brief word, and to receive his blessing.
Our group greeted the majestic figure of His Beatitude Kyr Yosyf with enthusiastic applause. With visible emotion, Kyr Augustine gave the following address:
“Most Blessed Hierarch, here before you is the bishop, priests, representatives of Ukrainian organizations, and faithful which, together, constitute the People of God of the Apostolic Exarchate in Great Britain. It is our pleasure to render You filial homage, fidelity and love. We are all children of our Mother-the-Church which was cut down in our native land but whose roots have spread far and wide, even across the English Channel and which sprung up on the other side— a beautiful branch which is the Ukrainian Catholic Church in Great Britain. It remains part of the Universal Church and of the Ukrainian Nation.”
“We came to take part in the solemn consecration of Saint Sophia and to observe the achievements which are the result of Your intense labours and of God’s grace upon His children. Wherefore it is a pleasure for us to greet you as our Dearest Hierarch and, on this occasion, to bring you the gift of these cloths for the high altar and side altars. The material from these cloths was made by the same firm that furnishes Buckingham Palace, and the embroidery upon it is the work the members of the Organization of Ukrainian Women in Great Britain (OUZ) from Coventry, Leicester, and Waltham Cross, and of our Sisters Servants of Mary Immaculate in London. We also brought a collection toward Saint Sophia, which has already surpassed two-thousand pounds sterling, and which is to continue and which we hope will surpass three-thousand pounds. For our country, this represents a very considerable gift, especially considering that were are still fundraising to pay the debt on our new Cathedral.”
“On this occasion when we come before Your Beatitude, it is a pleasure for me to render homage and filial love, and to repeat and once again invite Your Beatitude to visit us in Great Britain. We hope that this will take place in the coming year, perhaps around the time of Green Holidays [Pentecost], so that, as with other eparchies around the world, we too might have the joy of welcoming you among us and that You would lift our spirits with Your presence. This [visit] would surely bright forth the choicest fruits for our Church. which grows and flourishes not only to support our life in the lands of emigration but also to support our suffering Church [in Ukraine]. Surely our growth, in a wider sense, represents the fruits of the [spiritual] merits of Your sufferings.” *
“And here I would like to say that we, the bishop, clergy, and all the faithful, share your dreams and hopes which we have also taken upon ourselves that, God willing, our Particular Church (Pomisna Tserkva), our Ukrainian Catholic Church will soon be crowned with a Ukrainian Catholic Patriarchate.”

A powerful chorus of Mnohaya lita [God grant him many years] concluded those sincere and heartfelt greetings, to which His Beatitude Kyr Yosyf responded with emotion:
“Most Reverend Bishop, Dear Pilgrims! I am extraordinarily pleased that, particularly from Great Britain, you came here in such numbers. Our Ukrainian Church in Britain should raise its powerful voice. Never forget that you live in a country that, since the Middle Ages, had ruled the world. I hope that, living among that people, you would benefit from even a small portion of their practical wisdom, courage, and composure, for which the British are famous. Then, like it or not, living among that powerful nation spread across the globe, you will acquire their virtues and characteristics and bring a good portion of those positive qualities to the history of the Ukrainian Nation.”
“I am especially grateful to you, Dear Bishop, for your donations and for these beautiful altar cloths. God grant that they be a visible testimony of the strength and consciousness of the unity of the Ukrainian nation across the entire globe. And may they serve as a powerful prayer to the Lord God for the many years of your labours. I am especially grateful, especially to You, Bishop, that you are the first in Europe to acquire a Cathedral church as a stronghold and enduring home. Do not fear because, having fled your homeland, you are living as if in a foreign country. Rather the opposite is true: for we should be represented everywhere and have our own homes and strong enclaves. By establishing such homes far and wide, today our emigration can do much more that all those 45 million in Ukraine! Reflect well on this, that your voice, your achievements, your deeds is a voice heard by the world and has tremendous significance. And it is precisely this that our opponents and our enemies fear the most! And if you, Most Reverend Bishop, will lead this people and direct it, you can be confident that the majority of the Ukrainians in Great Britain will be a powerful support, not only for you in Britain, but also for the entire Ukrainian nation throughout the world.”
“God grant You many years! God grant You success! God grant that you form Your children to become well-educated wise people and leaders, and also that you may succeed and not have to live by begging for bread but from the labour of your own hands. And when you become prosperous and are able to support not only yourselves but also the Church and the whole nation, and raise your children to become honourable people, then you will have fulfilled your calling. May God grant you many years and His blessing.” 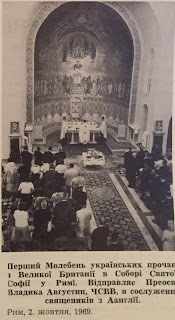 After singing Боже великий, Творче всесильний (O Great God, Almighty Creator, look upon our native land), Kyr Augustine presented to His Beatitude Rev. Ivan Muzychka, Rev. Stefan Orach, Rev. Teodor Tysak, as well as representatives of Ukrainian organizations: Ivan Ravliuk (AUGB), Maria Sydor (OUZ), Bohdan Rohach (SUM), Roman Stryhanyn (Plast), Vasyl Oleksiv (UVC, UIC), Vasyl Bortesky (Obnova), Vasyl Dubil (OBV), V. Parubochy (church men), Onufriy Shtunder (Church elders), Ilya Yavorsky (cantors), I. Shkatuliak (church contacts).
At the end of this moving encounter, each of the approximately 70 people greeted His Beatitude separately. In the middle of an historic Synod of Ukrainian Catholic Hierarchs, our Major Archbishop sacrificed a lot of time, attention, and love for us. It has made an impression on us which will remain as an enduring testimony not only for those who took part but also the entire Ukrainian community in Great Britain.