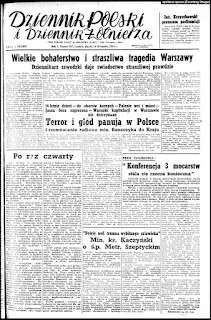 The following statement from Minister of Religion and Education, Monsignor Zygmunt Kaczyński, appeared on the front page of Dziennik Polski and L'Osservatore Romano, respectively the principal news organs of the Polish Government-in-Exile in London and of the Holy Apostolic See:

"The loss of Metropolitan Sheptytsky is grave as much for Poles as for the Ukrainian peoples of Poland. The deceased combined in his person the eminent qualities of pastor of souls and patriot. Throughout forty-years of intense activity, he efficaciously contributed to the development of the religious and cultural life of the entire [Polish] nation and, understanding the absolute necessity, he constantly strove to bring Ukrainians to Poles closer together, on the frontiers of the their common homeland. During the occupation, Metropolitan Sheptytsky maintained his constant line of conduct, concerned as always for so many suffering people. In his pastoral letters, he always encouraged the faithful and his fellow citizens to maintain cohesion, deploring their fratricidal conflicts. We unite, the minister concluded, with the Ruthenian [Ukrainian] Catholics of the district of Lwów, who have been left orphaned of their Shepherd, and we mourn the loss of such an eminent personality and pray ardently for the repose of this chosen soul."

The Holy See announced today (28 October), the the official name of the Archivium Secretum Vaticanum (Vatican Secret Archive) is changed to Archivium Apostolicum Vaticanum (Vatican Apostolic Archive). In a motu proprio letter dated 22 October, Pope Francis explained that he was ordering the change in nomenclature after consulting close advisers and the Archive's Prefect. The papal letter, which alludes to "a vigorous and firm hope for progress" (no doubt in historical sciences and accessibility to the archival collections) provides a cursory history of the institution, emphasising that, over time, it has undergone various changes in structure and name. During one period, it was indeed known as the Apostolic Archive. From about 1646 it has been called Secretum (or Privy)  to distinguish it from archives with more public and civic administrative functions. The Letter argues that, in recent years, the understanding of the Latin term secretum has been lost among the general public [but not by scholars ed.] and the name has given rise to various erroneous impressions and caricatures (contained in popular literature and films). In 1881, Pope Leo XIII opened the papal archive to international scholars. Thenceforth, each Pontiff extended the chronological limit of constable materials. In 1985, John Paul II released documentation to the end of the pontificate of Benedict XV(1922). Benedict XVI opened the materials of the pontificate of Pius XI (to February 1939). Earlier this year, Francis announced that the coveted papers of Pius XII's reign (to October 1958) would be released on 2 March, the anniversary of the latter pontificate. The Vatican Archive is a collection of several historical archives of princely families, Roman Curial departments, and papal nunciatures and delegations. Its superiors and staff are experts specialised in archival sciences and church history. The Archive also offers a course with a diploma in archival studies. The announcement took many by surprise, even within the institution. One wonders whether the well-known abbreviation for citations "ASV" exclusive to the Vatican Archive, will now be changed to "AAV", an abbreviation common to other collections.
Posted by Rev. Dr Athanasius D. McVay, HED, FRSA at 04:56 No comments: