A Lack of Tact and of Delicacy

The Difficult Relations between Archbishops Sheptytsky and Twardowski of Lviv 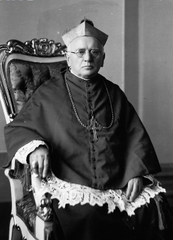