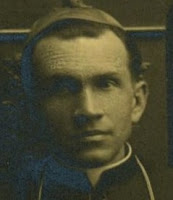 On 15 July 1912, Pope Pius X appointed thirty-five year old priest, Nykyta Budka, as the first bishop for Ukrainian Greek-Catholics in the vast Dominion of Canada. Budka was born on 7 June 1877 in the village of Dobromirka, in the Zbarazh district of what is now the Ternopil province of Western Ukraine. At the time it was part of "Kingdom" of Galicia and Lodomiria which was part of Austria-Hungary. His parents Michael and Maria chose for his patron saint, the Greek martyr Nykyta (Nicetas).
As a child and later as a young man he excelled in his studies. In 1897 he graduated from the Ternopil gymnasium (high school) with honors after which he studied law for four years at the University of Lemberg (Lviv). He wanted to enter the seminary and begin theological studies but first he had to to perform his mandatory military service in Vienna.
1901 was a turbulent and eventful year in Austrian Galicia. In the capital city of Lemberg, Ukrainian students walked out of the University in protest against discrimination by the Polish administration. The newly-enthroned Metropolitan Andrei Sheptytsky supported them in their quest and withdrew his seminarians from the University, sending them instead of the prestigious Jesuit-run Canisianum college in Innsbruck. Nykyta Budka completed his military service the following year and, resuming his priestly formation, he too was sent by the metropolitan to the Canisianum. There he joined the ranks of fellow Ukrainian seminarians, some of whom were destined to play leading roles in the Ukrainian Church. Among their number we Yosyf Slipyj, future head of the Church, Kazimierz Sheptytsky, the future Father Klymenti, brother of Metropolitan and archimandrite of the Studite monks; Yosyf Botsian, the future bishop of Lutsk; Konstantyn Bohachevsky, future metropolitan of the United States; Ivan Latyshevsky and Andri Ischak, who were to share Budka's fate of arrest, imprisonment and the crown of martyrdom for the Catholic Faith.
In Innsbruck, Budka appeared to have changed his name, which seems strange since secular clergy do not take religious names. The college academic records list him not under his baptismal name of Nykyta but as Viktor, which is simply a Latin translation of Νικήτας (Nicetas), a victor. The name derives from νίκη (victory).  It was often the custom in Jesuit universities to take Latin names.  The founder of the order itself, Iñigo Loiolakoa, who took the name Ignatius de Loyola, after the ancient Church Father, when entering the university.  So too the namesake of the Canisianum, St. Peter Canisius, is probably a latinization (canis) of the Dutch de Hondt.

Upon arriving in Canada the anti-Catholic Ukrainian press began to make fun of the new bishop and to look for anything that would limit his authority among the Canadian Ukrainian population. In one issue of the notorious but short-lived Kropylo Budka, who was actually a very patriotic Ukrainian, was chided for his lack of Ukrainian identity. Among other things, Kropylo accused him of changing his name from the modern Ukrainian form Mykyta to the archaic ecclesiastical form Nykyta. Universally, at the time and even today, ecclesiastics often use or retain the archaic slavonic version of their names. Notably, Metropolitan Sheptytsky never adopted the modern-Ukrainian Andriy but always retained the older Andrey. The same is true for Konstantyn Bohachevsky, who never adopted Kostyantyn. If the journal had known about the Innsbruck documents, then there might have been even more controversy over Bishop Budka's name.