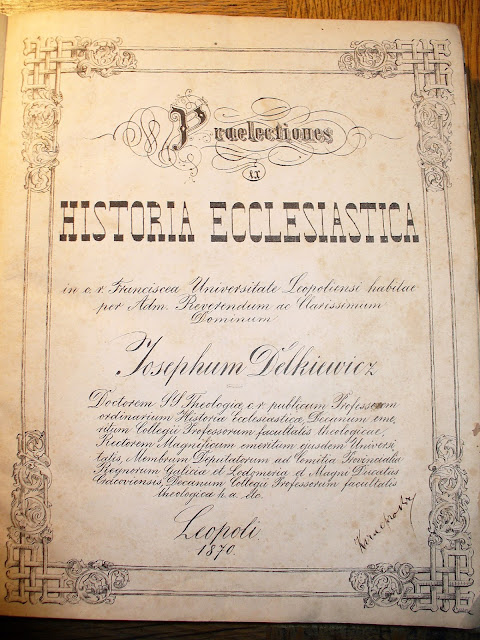 Yosyf Delkevych (1822–1912) was a priest of the Przemyśl (Peremyshl) Eparchy. He served as professor of ecclesiastical history at Lemberg (Lviv) University from 1866, deputy of the Galician Diet 1868–1869, and honorary canon of the Przemyśl cathedral chapter from 1875. 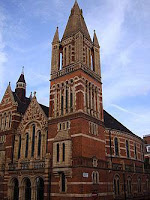 
“How I Found the Church at Saffron Hill”
by Father Josaphat François Joseph Victorien Jean, OSBM

I have been in England several times in my life. I was there before the First World War, in 1912, but did not meet with Ukrainians then. In the winter of 1921, I was again in London with Dr. Kost Levytsky to lobby for the Ukrainian question at the British Parliament. After that, I was in England in 1922, 1923, and 1925.

I know that, in 1922, the Ukrainian Diplomatic Mission, headed by Dr. Stefan Vytvytsky, was in London. Ivan Petrushevych also lived there. From 1925–1939 travelled around England Yakiv Makohin, who considered himself a descendant of Prince Rozumovsky. He established the Ukrainian Bureau in London where Drs. Kisylevsky, Biberovych, and Ivan Petrushevych worked.

It must be said, however, that Ukrainian immigration to Great Britain really began during the Second World War. In 1944, Ukrainian-Canadian soldiers in London established the Ukrainian Club at Sussex Gardens, Paddington. Beginning in October 1945, a portion of the Canadian Forces started to return home, and their place was taken by Ukrainian soldiers in General Anders’ Polish Corps. Among these were Greek-Catholic chaplains Antin Hodys, Stefan Koliankivsky, and Ivan Dumych. Afterwards, Rev. V. Pashkivsky joined them, for a sort time.

Having received a mandate from Bishop Ivan Buchko, whom the Apostolic See had named Apostolic Visitor for all Ukrainian Greek-Catholics in Western Europe, with the agreement of my Basilian superiors, I officially arrived in England on 1 March 1947. I immediately went to Westminster and requested an audience with Cardinal Bernard Griffin. The head of the Catholic Church in England received me very courteously, and we spoke at length about how to provide pastoral care for Ukrainian Catholics. I asked the Cardinal if we could acquire a small church for our religious needs, and well remember his response: “My own Catholics do not have enough churches for their own needs, since they were subject to much misfortune during the War. Some of our churches were damaged and, although some have been restored, there are still not enough. But I know that there are many un-renovated Protestant churches for sale. Look for one and, when you find it, let me know and I will help with the purchase.”

I then, immediately broached a second matter with the Cardinal, this time a personal one. Cardinal Griffin was a very merciful person. He picked up the telephone receiver and, for a long time, spoke with the superior of the Oratorian Fathers (London Oratory), and arranged the matter then and there. For a time, I could stay at the Oratory.


The superior received me very courteously and gave me a comfortable room. I felt as if I was one of my own Basilian monasteries. I celebrated the Divine Liturgy, every morning, in the magnificent church, sometimes even using the High Altar. I partook of the common table together with the Oratorian Fathers. I especially loved to celebrate the Divine Liturgy in the marble chapel of St. Wilfred, who was the principal patron of the founder of the London Oratory, the Servant of God, Father Faber (1814–1863).

For three weeks, I looked all over London for a church. I scoured the papers, but found nothing. In Paddington there was a ruined Protestant church but the architect thought that it would be difficult to repair it. Then, from 28 March, I began a novena in honour of the Servant of God, Father Faber, the founder and first superior of the London Oratory. Each day, I celebrated the Divine Liturgy and prayed ardently in for the intention of finding a church. I remember that 4 April 1947 was Latin (Gregorian) Good Friday, and I was not allowed to celebrate Divine Liturgy in Church. Then I went to Father Faber’s room where there was a small altar. That year was the hundredth anniversary of the Faber’s conversion from Protestantism to the Catholic Church. In a state of great peace, I celebrated the Divine Liturgy and was renewed with interior strength and hope.

The next day, Saturday, I finished my novena and set out to continue my search for a church. This time I chose the Holborn area. Emerging from the underground,  I stopped at the oldest church in London at Ely Place, Saint Ethelreda (1252 AD) and prayed there for a long time to find a church for Ukrainians. When I was returning to Farringdon underground station I saw a stone church, at the bottom of a dead-end street, that looked unused. Entering the lower area via stairs, I knocked at the side door. A woman came out; it was Mrs Guidera, the wife of [sic] the local alderman. Seeing that I was a priest, she kindly invited me into the house, and it was there that I first learned about the church. It was a Catholic Church that, for the past 50 years, had been used as a school and had been damaged a little, in one place, by a bomb. Alderman Guidera had received funds from the city to fix the roof and, for this, Cardinal Griffin allowed him to live in one part of the school. “Our neighbour, said Mrs Guidera, has a door and window factory. He wants to buy this school so that he can expand his business and is offering the cardinal £5,000. I believe that this building is worth that amount.

After examining the school, which had once been a church, I virtually flew to Westminster. The cardinal promised to reserve this building for the Ukrainians in London, with the proviso that Westminster Diocese could buy it back in the event that the Ukrainians no longer needed it.

And thus, with God’s help and the prayers of the Father Faber, Ukrainians received their first religious base which would soon helped to invigorate the life of our Church. For 20 years, in modest, dead-end Saffron Hill, God abided with the Ukrainian exiles and they have have reamined with Him and have been fulfilled. I hear that Divine Providence will shortly lead you to a new temple, your first cathedral [1968]. May God bless you! In your new church also remember me, just as I remember my chosen Ukrainian people, each day, for which I gave my whole heart.

Note: Father Jean's reminiscences were always somewhat romanticised and inexact in chronology, as primary correspondence of the period invariably demonstrates. Letters from Jean to Griffin and diocesan officials reveal that Jean had proposed several churches, all of which were deemed unsuitable, for various reasons. He discovered the 143 Saffron Hill property on Good Friday of the following year, 26 March 1948, long after he had departed from the Oratory and was living at the Ukrainian Bureau in Sussex Gardens. The Guideras were forced to leave the adjoining premises at 144 Saffron Hill, which was turned into parish offices. Sofia Guidera was the alderman, not her husband.