The First Biography of Bishop Budka

In such a situation the responsibility before God and history is great.
– Budka to Cardinal Sincero, 14 January 1928

One-hundred years ago, on Friday, 6 December 1912, Bishop Nykyta Budka arrived in Canada.  He and his two priest companions, Lev Sembratovych and Yosyf Bala, had boarded the Canadian Pacific ship Empress of Britain at Liverpool, England, on 29 November and after a rough Atlantic crossing the ship docked at the port of Halifax, Nova Scotia, one week later.

Only a few months before, in August, the Empress of Britain had been forced to return to port after colliding with a cargo vessel, and the Titanic had sunk off the coast of Newfoundland in April 1912.  Neither Budka nor Bala had ever travelled on an ocean liner and both became very sea-sick during the crossing. The experienced Sembratovych had been across the ocean several times, having served as a missionary in the United States and Canada since 1907.  He was the nephew of two Ukrainian Catholic metropolitans, Yosyf (1821–1900) and Sylvester (1836–1898), the latter having been made a cardinal in 1895.  Father Lev was acting as a guide and advisor to the new bishop whereas the recently-ordained Bala had accepted Budka's invitation to be his secretary.

On Saturday, 7 December the Empress of Britain continued on to St. John, New Brunswick, where Budka and his companions disembarked.  They continued on to Montreal and celebrated their First Divine Liturgy on Canadian soil on Sunday, 8 December.  Bala went on to Winnipeg to prepare for the bishop's enthronement while Budka and Sembratovych visited Canadian church and civil dignitaries in Ottawa and Toronto.  They arrived in Winnipeg on 19 December, the feast of St. Nicholas the Wonderworker according to the Julian Calendar. Three days later, on Sunday, 22 December 1912, Bishop Budka was enthroned at St. Nicholas Ukrainian Catholic Church.

After only three months in Canada, in March 1913, Budka sent Sembratovych back to Austrian Galicia (western Ukraine) to recruit priests to serve in Canada.  A year later, in January 1914, Bala asked to return to his homeland in order to enter the religious life as a Redemptorist.  Bishop Budka reluctantly gave Bala permission to do so on condition that he would return to Canada upon completion of his noviciate training.  However, when the First World War broke out in August 1914, neither Bala nor Sembratovych were in a position to leave Austria-Hungary, let alone come to Canada, a country with which this Empire was at war. Following the War Father Sembratovych returned to serve in the United States, and Father Bala kept his promise and, returned to Canada to served in the Eastern-Rite Redemptorist missions. 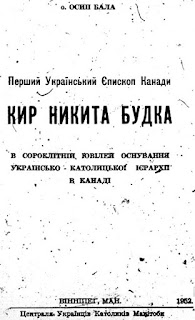 After Bishop Budka's return to Ukraine in 1929 he was somewhat forgotten in Canada. Father Yosyf Bala, however, had not forgotten him. As works began to appear describing the bishop in a negative light, Canadian Ukrainian Catholics decided to tell another side of the story of their first hierarch. And who better to tell it than the only living eyewitness to the beginning of that mission, Budka's first secretary. In 1952 Bala published the first biography of Nykyta Budka entitled Перший Український Єпископ Канади Кир Никита Будка: В сороклітній ювілей оснування українсько-католицької ієрерхії в Канаді (The First Ukrainian Bishop of Canada Kyr Nykyta Budka: on the Fourtieth Anniversary of the Founding of the Ukrainian-Catholic Hierarchy in Canada).  This book is now available online.  In his biography Bala described their sea crossing, their arrival in Canada, and the many challenges of their first year of missionary labour among the Ukrainian immigrants.

Until  now Bala's work, a mixture of hagiography and history, had remained the only biography of Bishop  Budka. In 1991 the Bishop Budka Council of the Knights of Columbus in Regina, Saskatchewan, released Bala's work in English (with other articles) in a volume entitled Pioneer Bishop: The Story of Bishop Nicetas Budka’s fifteen years in Canada.

A comprehensive historical biography is soon to be released by the Eparchy of Edmonton and Metropolitan Andrey Sheptytsky Institute.  It's title is God's Martyr, History's Witness: Blessed Nykyta Budka, the first Ukrainian Greek-Catholic Bishop of Canada.