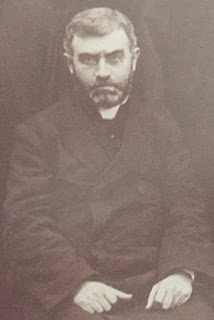 
The Oriental Congregation’s wings had been clipped in March 1922. Shortly after the Annuario incedent, its head, Cardinal Marini became ill and was replaced by Cardinal Tacci. Marini had not demonstrated any remarkable capacity and Tacci turned out to be even worse, particularly due to an undiscovered brain tumour. During the latter’s term, many affairs were left unresolved and a number of important documents were mislaid, only to be found among the cardinals papers after his death. By 1924, in the words of Korolevskij, Benedetti had become “disgusted”. He left the Congregation on 31 December 1924 and passed to the Vatican Library the following year.
Although he ceased active service, Enrico Benedetti was well respected in the Roman Curia for his erudition and for many years of service he had given in no less than three Vatican departments. As a result, following his curial retirement, Don Enrico was called upon to serve as consulter to the Consitorial and Oriental Congregations; charges which he fulfilled until his death.
The Ruthenian bishops would have been devastated to see one of their few overt sympathizers retire from the Roman Curia. The relationship of trust that they had formed with Benedetti induced Metropolitan Sheptytsky to propose him for yet one more service. At their Episcopal Conference of 1928, the Ruthenian hierarchs of Poland (Ukrainians) and Czechoslovakia, Yugoslavia (Carpatho-Ruthenians) and Bulgaria agreed to Sheptytsky’s proposal to appoint Benedetti as their man in Rome. On 8 July 1928, Sheptytsky wrote to Monsignor Giuseppe Pizzardo, head of the Congregation for Extraordinary Ecclesiastical Affairs, asking him if the Curia had any objection to the bishops’ recommendation: The Bishops “considered Msgr. Enrico Benedetti, whom all have known for a long time, and who has always shown great devotion to the interests of their Churches and possesses all the necessary experience.”
Pizzardo asked the opinion of Monsignor Eugène Tisserant, a co-worker of both Benedetti and Korolevskij at the Vatican Library. Tisserant replied that he could not see any difficulty with the appointment. The matter was then forwarded to the Oriental Congregation, which also found no objection. Cardinal Sincero wrote to Sheptytsky on 19 July 1928 that “This Sacred Congregation is very happy to inform Your Lordship that it has nothing against your wish [...] as it has nothing against the person chosen for this office.” Once he had received Benedetti’s consent, Sheptytsky formally presented him to the Apostolic See on 27 November 1928 as procurator of the Ruthenian Episcopate in Rome for the affairs of the Ruthenian Churches.
Being familiar with both worlds, Benedetti was perfectly suited to act as a liaison between the Roman Curial offices and the Ruthenian hierarchy. Among notable affairs handled, in 1929 he made important oral clarifications regarding the candidates for auxiliary bishop to Metropolitan Sheptytsky. Two years later, in 1931, he rendered an important service when, together with Korolevskij, he was consulted by the Congregation on the history and status of Sheptytsky’s title Metropolitan of Halych, as distinct from to that of Archbishop of Lviv and Bishop of Kamiamets-Podilsk.
In his final years, Benedetti endured a long illness. Shortly before his death, which occured on Monday, 10 March 1941, he received a special blessing from Pope Pius XII. Monsignor Professor Enrico Benedetti’s funeral took place three days later, on Thursday, 13 March 1941, at the Roman parish church of the Sacred Heart on the Lungotevere Prati. The funeral rites were attended by numerous officials of the Oriental Congregation, among whom many counted themselves as admirers of their former colleague. Eugène Tisserant, now the cardinal-secretary of that department, subequently paid high tribute to Benedetti’s example of generous and loyal service to the Church.
Benedetti's memory continued to endure in the tiny community of Ukrainian priests and religious in the Eternal City, especially among those whom he had known and helped. As late as 1998, Ukrainian historian Liliana Hentosh identified his photograph, still displayed in the corridors of Piazza Madonna dei Monti, the seat of the Ukrainian procurature. The photo had been displayed at the orders of Cardinal Slipyj, whose first Roman sojourn had been arranged by Benedetti. Sadly, with recent renovations to the Madonna residence, even this last vestige of his memory has vanished.
Posted by Rev. Dr Athanasius D. McVay, HED, FRSA at 10:03 No comments: