Audiences with Cardinal Pacelli and the Defence of Kosher 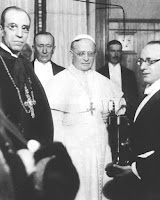 The critical edition of Cardinal Eugenio Pacelli's handwritten minutes, from audiences with Pope Pius XI and the Diplomatic corps, is being prepared by historians of the Vatican Archives. To date, two volumes have been released, the audiences of 1930 and 1931.

Throughout the 1930s, Pacelli repeatedly drew the attention of the diplomatic corps to the fact that Hitler and his racist ideology was a huge problem for humankind. After a number of sensational articles appeared in the press, I thought it was time to publish English translations of the audience minutes and other documents which I transcribed several years ago, from two Vatican archival collections.

Minutes taken by papal Secretary of State,
Cardinal Eugenio Pacelli
from his daily audiences with Pope Pius XI
and from his audiences with the Diplomatic Corps

Pius XI–Pacelli, 13 May 1933
Re. Possible Audience for Minister Göbbels
The Holy Father regrets that he is not able to receive him.

Pacelli–von Bergen, 18 May 1933
The upcoming visit to Rome of Minister Göbbels was discussed.  The Ambassador has written to Baron Neurath to ensure that the Minster does not ask for an Audience with the Holy Father, something to be avoided [as it would require] and official refusal.

Pacelli–Charles Roux, 6 July 1934
He spoke about the situation in Germany and the barbaric killings that happened there, saying that a government like that represents a great danger for the peace of Europe. He made me read the report of the French Ambassador in Stockholm, in which the latter recounts that the Archbishop of Uppsala, Dr Eidem, travelled to Berlin to speak with Hitler in defence of the Protestant churches. Hitler gave a speech for three-quarters of an hour to explain that he was the greatest and most beloved man in Germany and with a single word was capable of destroying the Protestant religion, and also the Catholic one. The Archbishop said to the Ambassador that Germany is being governed by a “madman.”

Pacelli–Charles Roux, 27 July 1934
He spoke about the very serious events in Vienna. [Attempted Nazi coup] I told to him that, in my view, it would be opportune for the [European] Powers to take vigorous steps in order to put a stop to such a serious cause of disorder in the heart of Europe.

Pacelli–Charles Roux, 9 August 1934
He also told me that, in Berlin, the idea of a common initiative of the three Powers (Italy, France, Britain) had not succeeded, following the events in Austria. Britain generally does not like to become involved in the affairs of the continent. ... Everyone knows the role that Germany actually played and its responsibility; but it was impossible for France to propose a joint intervention, when the other two parties did not intend to participate.

Pacelli–Skrzyński, 14 September 1935
Returning from a brief stay in Germany […] He complained about the attitude of many priests, especially the elderly which, in their opposition to the new regime. They will not accept even that which is truly good and don’t want to allow the salute ‘Heil Hitler’, etc. I responded that it while it is very true that there is a strong religious revival in Germany, […] that is certainly not to be attributed to the Government, which persecutes the Church and keeps as Reichsleiter of German Culture someone like Rosenberg. […] So it is not surprising if priests are show little support to a Government which makes the Church suffer so much.

Pius XI–Pacelli, 29 December 1935
Re. Yesterday’s words of the Pope to the German Ambassador.
The Holy Father said, with profound emotion: We did not expect to be treated this way by Germany. There is someone who says, like Napoleon said in Russia, that in a few years the Catholic Church will disappear in Germany. It is not the Church that is to disappear, others will disappear.

Pacelli–Skrzyński, 7 March 1936
Exposition of the World Press […] Ferociously anti-Semitic papers were represented but a very Catholic paper like Czas was not.

Pius XI–Pacelli, 4 April 1936
Re. the German Ambassador insisting on an Audience for Minister Frank.
Not possible — if it were conceded, he would return to Germany and say that he had been received by the Pope and that everything is fine.

Pacelli–Pignatti Morano, 8 January 1938
He came at my summons. I explained to the Ambassador that, after the Holy Father on Christmas Eve made that lofty and wise protest against religious persecution in Germany, it would have been distressing for Him to read in yesterdays and this morning’s papers (for example in Il Messaggero) an exaltation of Hitler and of National Socialism to the level of delirium. And this when, there not a single comforting piece of news from Germany regarding the Government; neither from the nuncio nor from the Bishops nor from other sources; not a single obstacle removed, not a single one of the Holy See’s protests is heard with the slightest deference!

Pacelli– Pignatti Morano, 25 March 1938
He came at my summons by order of the Holy Father, in order to speak with him about what the papers published regarding the illumination of buildings on the occasion of the upcoming visit of Hitler to Rome, and of the measures published regarding the extension of such illumination to the Via della Concilazione and perhaps even religious houses and Catholic institutes. This would greatly displease the Holy Father, to Whom it was promised [by whom?] that nothing would ever be done which would cause him displeasure. His Holiness asks if this apotheosis to the point of excesses, of a confessed enemy of the Catholic Church and of the Christian religion, is not contrary the first article of the Concordat, as well as against good sense. That which the Head of the Government [Mussolini] sent the Ambassador to say made the Holy Father frown. The Holy Father is tempted to doubt his [Mussolini’s] sincerity.
The Ambassador said that he will deal with the matter immediately and hopes to be able to promptly put the matter in order. He added that the Governor of Rome had even prepared a letter to obtain the consent of Vatican authorities for an illumination with large reflectors on Saint Peter's Basilica, on the occasion of the arrival of Hitler, but he stopped it. The Ambassador has cause to believe that this union with Germany, in which the Italian Government is entangled out of necessity, will not last long. For the moment and by necessity, external appearances make up for lack of solid content. The Osservatore Romano does well to hammer against the abuses of Nazism. He [the Ambassador] immediately shows all those articles to the [Foreign] Minister. After the annexation of Austria, everyone was apparently against the Minister, but now things have calmed down.

Pacelli–Menschausen (chargé d’affaires), 7 September 1938
I believe even less that Ambassador [von Bergen] speaks with the mandate of the Government in as much as, for two years, our relations have become purely formal; so much so– an example which I believe to virtually unique – although there is an Ambassador, I no longer receive any response to my diplomatic Notes.
Herr Menschausen replied that we should also have been able to understand the opinion in Germany from the press. I answered that, in Germany (as in Italy) the press carries but a single view; those who have a different opinion kommen nicht zum Worte [do not speak].

From correspondence between Cardinal Pacelli and the Apostolic Nuncio in Warsaw, Archbishop Filippo Cortesi, Regarding Anti-Semitic regulations

Pacelli–Cortesi, 26 April 1938.
According to information received here and that which was reported in the press: in Poland an anti-Semitic law was introduced, which no longer permits butchering by slitting the jugular vein, which the Israelites are obliged to perform according to their religious precepts.
Wherefore, the August Pontiff, inspired by a noble sense of benevolence toward all who suffer persecution, desires Your Excellency, after ascertaining the veracity of such news, to explain to the Polish Government, in the form and under the circumstances you deem appropriate, that it would be inopportune to interfere […] in matters which are of a strictly ritual character.

Cortesi–Pacelli, 7 May 1938.
That law was indeed debated and approved by the Chamber of Deputies but was suspended in the Senate and will not be reintroduced. […] As your Eminence rightly notes, every anti-Semitic act of persecution or violence must be condemned.
Posted by Rev. Dr Athanasius D. McVay, HED, FRSA at 14:01 No comments: