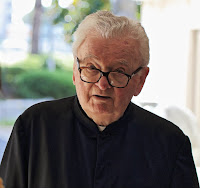 Mitred-archpriest Doctor Ivan Muzyczka was born 15 November 1921 in the village Pukiv in Stanyslaviv (Ivano-Frankivsk) province, the son of poor farming stock. Having received his early education in his native Pukiv, he entered the Rohatyn High School on a scholarship from the local Cooperative Union, and subsequently continued his studies on scholarships from the wealthy Lviv property owner, Ivan Tyktor.

Perhaps the strongest formative influence on young Ivan was his local parish priest, Vasyl Solovii. In addition to his profound sermons, Muzyczka was also enamoured by the singing of the church choir, which was directed by the pastor. This is where two life callings, to the priesthood and to music, were nurtured in the soul of this young boy.

In 1941 Ivan became an elementary school teacher in the village of Putyatyntsi, and the following year at the elementary school in his native village. In 1943 he graduated from the department of music theory and violin from Rohatyn teacher’s college.

Convinced by the views and authority of Professor Mykola Uhryn-Bezhrishnyi, in 1943 he joined the “Galicia” Division. After basic training, “volunteer” Muzychka was assigned to the Division’s orchestra but, due to a long illness, he was forced to abandon the orchestra and became a duty nurse and interpreter.

In the last months of the Second World War, most of the Division came under British captivity was interned on the east coast of Italy, near Rimini. In July 1945 several priests were sent from Rome to minister to the internees. Due to the intervention of the Holy See, especially via Bishop Ivan Buchko, in the autumn of 1945, the British allowed two dozen of them to study at the Pontifical St. Josaphat College in Rome. Thus Ivan Muzyczka took his first step along the road of his priestly vocation.

During his seminary years, Muzyczka's musical training bore much fruit. In 1949 he began directing the seminarians choir for the Ukrainian Liturgies broadcast on Vatican Radio and, after his ordination, contributed many recorded sermons for VR broadcasts. He was the first to transcribe Izydor Dolnytsky's Hlasopisnets (church melodies) from the old 4-line staff and tetrachord scale into modern musical notation in the keys of F and B flat. The book was printed in manuscript form for internal use in 1951 and published under the name of Napivnyk in 1959.

Muzyczka obtained a baccalaureate degree from the Pontifical Urban University in Rome (Propaganda Fide) in 1947. He defended his dissertation, entitled "On [the use of] water in the Byzantine Liturgy" on 27 June 1953, and was granted the doctoral degree in liturgical theology from the Urbaniana following the publication of the dissertation by the Vatican printing press.

Ordained a priest by Bishop Buchko on 3 May 1951, and unable to return to Ukraine under Soviet rule, Father Ivan was assigned to the Ukrainian Catholic mission in England. There he faithfully served for the next 24 years, principally in the West Midlands. After completing his doctorate, he was assigned to Rochdale in 1953 and Wolverhampton the following year. The latter was to remain his pastoral base for the surrounding area until 1975. A great admirer of the British, especially after having been interned under their "civilised" captivity; a fact for which he was always grateful, Muzyczka went on to become a naturalised British Subject.

Metropolitan Yosyf Slipyi was released from the Soviet Gulag in 1963. From 1970, Muzyczka began to assist Slipyj in his project to establish a Ukrainian Catholic University. Finally, in 1975, Father Ivan gave in to Slipyi’s insistant demands that he move to Rome permanently, to dedicate himself to the project. Thenceforth, Doctor Muzyczka concentrated on lecturing in music, homiletics, pastoral theology. He was responsible for publishing the Ukrainian Catholic theological-historical journal Bohoslovia, as well as the opera omnia of Cardinal Slipyi, together with Bishop Choma. In 1976 Slipyi named hi pro-rector of the fledgling "University" (Slipyi was titular rector) and rector of St. Sophia College-Seminary in 1985.

Throughout the dark period of Ostpolitik, Muzyczka served as one of Cardinal Slipyi's inner council, as one of his closest advisors. Slipyi is even thought to have looked upon Muzyczka as a successor, for a time. For faithful service he was named canon of the Lviv Chapter (in exile) and mitred archpriest. In fact, Slipyi would often refer to him affectionately as "mitrat zolotyi" (golden mitred).

Father Ivan was present when Slipyi secretly ordained three bishops on 2 April 1977: Lubomyr Husar, Ivan Choma, and Stefan Czmil. Having refused the accept the episcopate himself, he nevertheless agreed to act as the sole witness and also to cantor at the Divine Liturgy of episcopal chirotonia. Two of the three bishops were later recognised by Saint John Paul II, in 1996: Husar succeeded Slipyi as Major-Archbishop in 2001, Choma became UGCC procurator to the Holy See, and Czmil is famous for having being spiritual advisor and teacher to Jorge Maria Bergoglio (the future Pope Francis) in Argentina. Czmil died in 1978, before the papal recognition could occur.

The church of Saints Sergius and Bacchus had been given to the Kyivan Metropolitan in 1641. After having served as the seat of the metropolitan’s procurator and, from 1897, the Pontifical Ruthenian College, the church and adjacent residence became the General Curia of the Basilian Order. After the Basilians moved to the Aventine Hill, the properties were eventually re-acquired by Cardinal Slipyi, and Sergius and Bacchus was raised to the status of a “personal” parish of the Diocese of Rome. In 1976 Father Ivan was appointed its first parish priest, and served in this capacity until 2001.

Following independence in 1991, Father Ivan travelled annually to his homeland. In Ukraine, he was invited to public lectures in various state and church institutions. He also contributed numerous articles on the history of theology and spirituality in Ukraine, social issues, catechetics and Christian morals, inter-religious and inter-church relations, and spiritual themes in Ukrainian literature.

In 2006 Muzychka was also named rector of the church of St. Sophia, where he served hundreds of Ukrainian migrant workers and was also responsible for the Ukrainian Catholic pastoral mission in the city of Naples.

On 3 March 2011, after the election of Sviatoslav Shevchuk as Head of Ukrainian Greek-Catholic Church, Father Ivan delivered a moving oration to the patriarch. In welcoming him to Saint Sophia, he traced the history of the sobor, built by Shevchuk's predecessor Slipyi in 1969 as a Hagia Sophia for Ukrainians in exile.

In 2013, he received a doctorate honoris causa from the Ukrainian Catholic University in Lviv.

Upon his arrival in Rome in 1975, Father Myzyczka remarked: "So here I am and I won't be leaving." Following years of ardent toil, exhausted physically but not spiritually, he spent his final years at Saint Sophia's in Rome. After having been hospitalised several times for a lung illness, Father Muzyczka died in his room at Saint Sophia's at 8:06 PM, on 22 February 2016, at the age of 94 years.

Father Ivan had been looking forward to the arrival of Patriarch Sviatoslav and his permanent Synod, for their annual meeting. Alas, they missed him by an hour. Together with Metropolitan Volodymyr Viityshyn and Bishop Venedykt Alekseychuk, the patriarch prayed panakhyda over the mortal remains of Father Ivan. Hearing the news of his death, prayers were offered for his eternal repose across the globe, from Kyiv to Sydney, Australia. Ivan Muzyczka's passing to eternity marks the passing away of an entire epoch in the history of our Church.

The first priestly parastas was celebrated on Tuesday evening, 23 February, by Kyr Hlib Lonchyna, Eparch of the United Kingdom of Great Britain, assisted by Kyr Dionisio Lachovicz, Apostolic Visitor for Ukrainians in Italy, and Kyr Venedykt Alekseychuk, auxiliary of Lviv, with many priests concelebrating including Father Genesio Viomar, Basilian Protoarchimandrite and Archpriest Bohdan Prakh, Rector of the Ukrainian Catholic University in Lviv.


Memorial services were celebrated throughout the day at St. Sophia on Wednesday and Thursday, 24–25 February. The Hierarchical Funeral Divine Liturgy was celebrated at 4:00 PM on Thursday 25 February by Patriarch Sviatoslav, with Metropolitan Volodoymyr and Bishops Hlib, Borys, and Venedykt concelebrating, as well as numerous priests including four who came from England especially to pay their respects. A large number of religious sisters were present, including the Sisters Servants of Mary Immaculate, the Basilian Sisters, and the Sisters of Saint Anne. Many faithful also arrived from abroad to do the same, and Father's Ivan's parishioners attended in great numbers.

A letter was read, addressed to Patriarch Svaitoslav from Cardinal Sandri, Prefect of the Congregation for the Eastern Churches, expressing condolences to the Ukrainian Greek-Catholic Church from the Apostolic See, and offering praise and thanksgiving for Father Muzyczka's long and dedicated mission.  And his homeland also paid its respects in the person of the Ambassador of Ukraine to the Holy See.

Ivan Muzyczka was interned in the sobor's crypt, next to his co-workers, Bishops Ivan Choma, and Stefan Czmil, and also near Archbishop Yosyf Sembratovych, who died in Roman exile in 1900.

Additional Ukrainian-language links on the life of Father Muzyczka:

Article in "Den'" by Clara Gudzyk

Muzychka's article on Ivan Franko's death and his religious beliefs