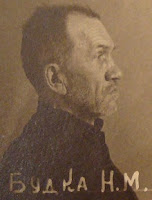 “I am writing to draw the matter to your attention, and to formally request redress by the Canadian government. [...] According to the Canadian Red Cross, Bishop Budka is known to have died in exile in Karaganda, Kazakhstan Soviet Socialist Republic on October 1, 1949 [28 September]. [...]

The Ukrainian Catholic Council of Canada, following consultation with Metropolitan Maxim Hermaniuk, Archbishop of Canada, is requesting your assistance in making an official inquiry of Soviet officials as to the specific circumstances surrounding Bishop Budka’s death, and the location of his burial place. Furthermore we are requesting that the Canadian government seek formal acknowledgement from Soviet authorities that the Soviet regime arrested and sentenced Bishop Budka to hard labor in Siberia fully aware that he was, at the material time, a Canadian citizen.

Our request is being made at this time in preparation for the Centennial celebrations of Ukrainian immigration to Canada in 1991. The laity, in conjunction with our Church hierarchy, intend to pay special tribute to the late Bishop Budka, as the first Ukrainian Catholic bishop for Canada, and to recognize him for his many outstanding achievements as our spiritual leader.  Because many Ukrainian Canadians consider Bishop Budka as a martyr and confessor of the Faith it is essential to present to all Ukrainian Catholics in Canada and abroad a full accounting of his death.”

– Robert Herchak, President of the Ukrainian Catholic Council of Canada, to The Right Honorable Joe Clarke, Secretary of State for Foreign Affairs, Victoria, 26 May 1989.

Note: Through his beatification by Blessed John Paul II in June 2001, Budka was formally recognized “as a martyr and confessor of the Faith,” venerated by 1 billion Catholics worldwide, including 13 million Canadians (being the largest religious denomination in Canada).

Budka was appointed by St. Pius X as Bishop for the Ruthenian-Ukrainian Catholics of the Byzantine Rite (Greek-Catholics) one hundred years ago today, on 15 July 1912.
Posted by Rev. Dr Athanasius D. McVay, HED, FRSA at 09:21 No comments: