On the 80th Anniversary of the Election of Pius XII 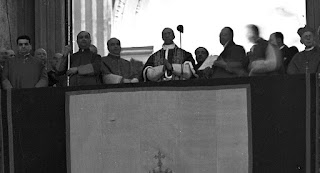 In 2006, Pope Benedict XVI opened the files of the Pontificate of Pius XI (1922–1939). Documents of the archives of the Apostolic See can be consulted up to 11 February 1939, with some exceptions. One such exception are the fascicles concerning the death of Pius XI and the election of Pius XII in the Archive of the Nunciature of Warsaw, in the Vatican Secret Archives. They contain updates from the Roman Curia to the Warsaw Nunciature and official messages of congratulation. Local church archives are invariably open beyond February 1939, and I have translated a message from the Oriental Congregation addressed to Bishop Ladyka, which was sent to all Eastern Catholic superiors. Historians eagerly await the opening of at least a portion of the Apostolic See's archives from of Pius XII's pontificate. Perhaps this eightieth anniversary will be the harbinger of that happy event.

From the Archive of the Nunciature of Warsaw:

2/III 1939
Vatican City
[I have the] pleasure to announce [that] Cardinal Eugenio Pacelli [has been] elected Supreme Pontiff Pius XII [,] alleluja. Deign [to] make [the] announcement [to the Polish] Government.

Your Excellency will not have failed to notice the delicate allusion that the new Pontiff addressed, in His first message, not only to the Bishops, the Clergy and to all the children of the Catholic Church spread everywhere across the world, – especially those who are suffering in poverty and pain – but “also to those who dwell outside the bounds of the Catholic Church.” And undoubtedly among the first of these, the heart of the Supreme Pontiff included the separated brethren to which, moreover, the August hope that Pius XII made a point of expressing is addressed: that “they would willingly accept divine assistance from Us, at this most solemn hour which We have implored in prayer from Almighty God.”

From the Archive of the Archeparchy of Winnipeg:

Eastern Christianity has very particular reasons to share the joy of the Catholic world at the election of the Most Eminent Lord Cardinal Eugenio Pacelli as Supreme Pontiff with the name of Pius XII.
He is not new to eastern religious questions as, in His multiple offices, He often dealt with them with vigilant attention and always with desirous hope of a priest and apostle. Now Pius XII assumes the Prefecture of the Sacred Congregation for the Eastern Church after already having offered, for many years, the wisdom of his counsel for its better administration, while fervidly and prudently collaborating with the codification of Eastern canon law.

And if His office of Supreme Pontiff – which He seems to indicate in the very choice of name – will be inspired by the magnanimous paths traced by the genius and piety of Pius XI, then the East is certain to have, in Pius XII, a Shepherd like the Former, lovingly solicitous of its every need and hope. And if, from the motto borne on his coat of arms “Opus iustitiae pax,” it is reasonable to envision a program, then it can be said that, by Pius XII, the East will continue to be governed with that goodness and justice which are the only sources of peace.
And wherefore, Most Reverend Excellency, may Your joy be great and that of all the clergy and people which constitutes your crown, and may their feelings of filial devotion and generous confidence reach the Most High, Who again has given the Church its Visible Head. A new era of greatness and glory is announced for Catholicism, and the Christian East shall have the richest part in this general rejoicing.
United to Your Excellency and to His entire diocese in rendering praise and thanksgiving to the Lord, I again unite myself to Your prayer and to those of Your faithful, that the sweetest Mother of God will protect, comfort, and enlighten, the Holy Father Pius XII in the Pontificate which begins today.


From the Archive of the Nunciature of Warsaw:

I beg Your Excellency to deign to receive, in the name of His Holiness the Pope, the homage of obedience, of fidelity and of piety, which I present to Him on the day of His Holiness’s coronation in the name of my clergy, my faithful, and my own mediocrity.
The magnificent conclave of 2 March was such a striking manifestation of the unity of the Church, that we felt a very great joy. Permit, Excellency, that I congratulate you – who takes the place of the Holy Father. This conclave, no less than the August Person of Pius XII, increases our supernatural hope that, under the reign of this pontiff, the poor eastern nations separated from the Church by the Eastern schism, will return, little by little, to the unity of the Catholic Church, or move toward this unity by evermore understanding that it is the word of the Almighty.