The Greek-Catholic Bishops and Ukrainian Independence: 1918 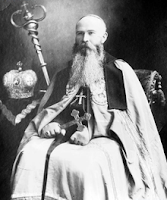 The Austrian Emperor Karl, when he still possessed legitimate power over the nationalities of Austria, promulgated an imperial manifesto to all the peoples of Austria on 17 October 1918, granting them the right to form their own separate national states. Our Ukrainian people of Eastern Galicia immediately called a national assembly on 19 October in Lviv. There, representatives of the whole nation and all its classes, in the presence of its three bishops (Metropolitan Sheptytsky, Bishop Khomyshyn, and myself), voted and proclaimed Eastern Galicia to be its own national, independent state under the name of “The Western Ukrainian Republic”.

After the promulgation of the imperial manifesto, all the nationalities of old Austria did the same. The Germans of Austria founded the Austrian-German Republic and their bishops immediately conformed to the new situation. This manner of proceeding of the German-Austrian bishops corresponded perfectly to the intentions of the Holy Father.

But Generals Haller and Iwaszkiewicz came and with the bayonet brought Eastern Galicia within the confines of Poland. When Metropolitan Sheptytsky, questioned on this, said that the proclamation of the Ukrainian National Assembly was a legitimate juridical act, he was accused of high treason.