Generation Mobilization - The Guns of August 1914 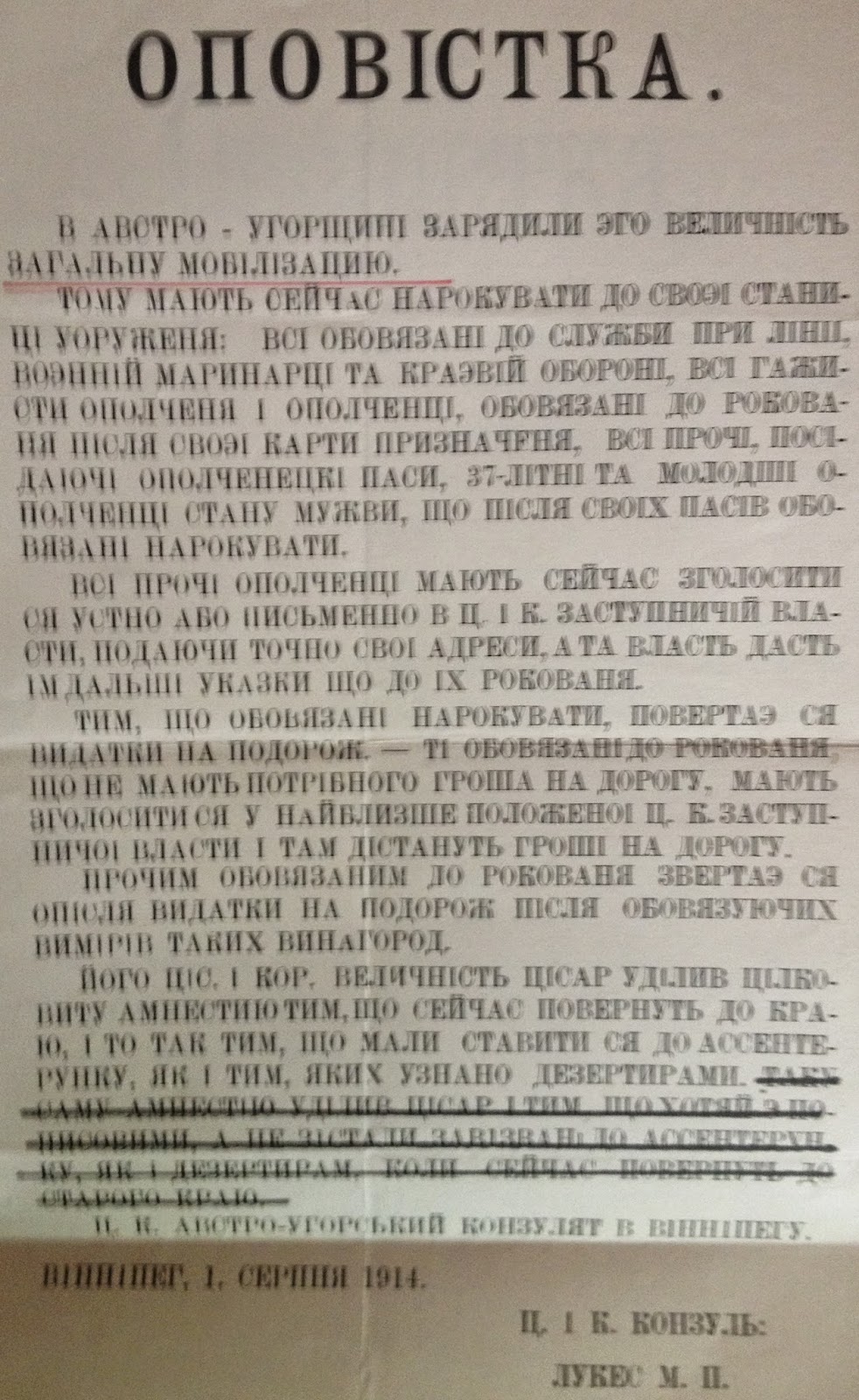 “Call to Austrians in Winnipeg,” Manitoba Free Press, 31 July 1914
The official proclamation of the partial mobilization order issued by the Government of Austria-Hungary was published in Winnipeg yesterday in “The Ukrainiann Voice” and other papers of the nationalities concerned.  German is the official language of Austria, but about ten languages are spoken by the people within the boundaries of the Empire.  Consequently, the proclamation of the partial mobilization appears in the two German papers of Wpg., in the seven Ruthenian and in the one Hungarian paper of the west.
The men concerned in the mobilization are being informed by announcement cards, in addition to the mobilization orders.  The order promises that expenses of travelling will be paid, and this will make considerable difference in the returning, as it is considered that many of the men, in these hard times, are too poor to bear their own expenses.
When the expenses are to be paid, and even advanced to those unable to meet them at the moment, it is expected that a large number of the men will respond to the call to arms.
The Austrian proclamation issued from the local consulate is an interesting document, and as published in the papers yesterday, reads as follows: [...]
It is very difficult to obtain any information regarding the spirit of Servians in Western Canada and whether orders of mobilization have been issued to them.  There are not many Serbs in Winnipeg, but Moose Jaw and Regina number quite a few among their cosmopolitan population.

Deserters Pardoned
By Austrian Emperor on condition they offer for service now
(Toronto July 30/14). Local Austrian subjects of various races have been officially advised that they are wanted only if they receive individual notice to that effect. Those who do not receive such notice will remain where they are.
It is stated with absolute authority that a manifesto has been issued by the Austrian Government granting official pardon “By the grace of the Emperor” to all subjects under military discipline who have previously deserted, or in any other way evaded their military duties. All to whom this applies must, in order to receive pardon, present themselves at once for military service without waiting for a summons.
It is anticipated that when this becomes widely known there will be an exodus of some thousands from Canada.

Austrians Leaving to Fight
(Montreal, July 30) The German liner Millahad, now in port from Rotterdam and Antwerp, will carry back to Europe the first Austrians to sail from Montreal to the seat of war. When the vessel clears from thisn port Saturday morning or possibly on Sunday morning there will be at least 200 of the local Austrians on board hurrying back to Austria at the call of the Emperor. 5000 Austrians in Montreal are supposed to answer the call of the sovereign for they are in te first and second reservists.  Quite a number of the collony have become British subjects and so are exempt from military service in the conflict. Austrian labor agencies are crowded today. On the door of each one is posted in a conspicuous place the order from the local consul requiring the first reservists to leave for home at once.  They are to report to him to arrange for passage. The notices are dated the 28th inst., and stamped with the local seal.