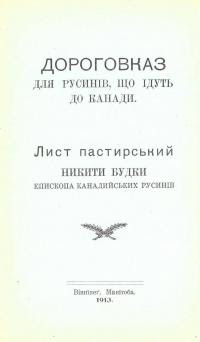 A new electronic library project has posted an online scan of Blessed Nykyta Budka's first pastoral letter Traveler's Guide for Ruthenians who are going to Canada (Дороговказ для Русинів, що ідуть до Канади). This document was published a hundred years ago on 5 April 1913 and was followed by a second pastoral letter on 20 April entitled On the Need to Organize (О потребі організації).
The second letter is written in the form of a traditional pastoral letter and so it is often mistakenly referred to as Budka's first pastoral.  However, the Travellers Guide is clearly labelled "Pastoral Letter." on its cover and frontispiece. The reason for the confusion is that, unlike On the Need to Organize, Traveler's Guide is not written in the traditional form. Although it does fulfull the criteria of being a message on faith and morals, Bishop Budka chose to compose his first address to his flock in the style of a handbook for Ukrainian Greek-Catholic immigrants to Canada. This informal style was the tone with which he had been familiar while serving as consultant for Ukrainian emigration to the Archeparchy of Lviv and Metropolitan Andrey Sheptytsky.
Written in their own language and in a paternal but informal voice, this pamphlet cautioned against the tempting offers and free gifts of religious proselytizers and work-agents seeking to take advantage of the newcomer’s ignorance.  Bishop Nykyta advised his flock not to change their itineraries, and concluded by encouraging them not to neglect their spiritual welfare religious assistance: “Once you have settled in, find out where there is a Ruthenian priest.  Invite him to visit your settlement and to help you to organize a parish.” It is significant that, before setting out a formal pastoral program, Budka went to the heart of his people’s religious problems: the fact that they were being proselytized from the very moment they set foot in their new land.
English translations of pastoral messages may be found in Pioneer Bishop: The Story of Bishop Nicetas Budka’s fifteen years in Canada. Published in 1990 by Knights of Columbus Council 5914, Regina, Saskatchewan.

Evolutio: A snippet of Budka's second pastoral letter, On The Need to Organize, was posted under the heading "For Your Good and Your Gain".
Posted by Rev. Dr Athanasius D. McVay, HED, FRSA at 09:42 No comments: