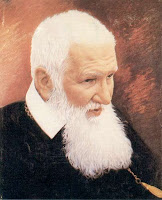 I think I am obliged in conscience to ask for a coadjutor with the right of succession, and here are the arguments that compel me to this request:

The time of my death will probably be a moment of a very acute crisis, during which it will be much more difficult to select my successor than it would be in relatively peaceful times.

Our government, and more so Polish public opinion, will do their utmost to find a politician, that is a man who would more or less undertake to implement a political agenda hostile to the Union and our nation. There will always be a strong party that will want the promotion of the worst candidate for our ecclesiastical province and there will always be a candidate too weak to withstand the demands of the powerful, against whom there is no canonical reproach.

In the event that Your Holiness deigns to accept my request, I would have the opportunity to present my opinion and nothing would bind in the absolute liberty of the Apostolic See. I did and I think I can say in good conscience I can not have any other intention than the triumph of the great cause of the Union, to which I devoted my life that I would die a hundred times, and in which there is only the glory and triumph of the Apostolic See. For the salvation of the East is one of the greatest glories of the Holy See and the Pope.