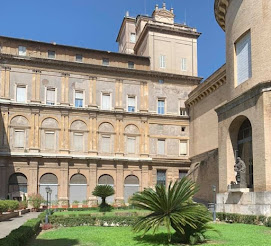 In 2020, for the first time time in 22 years, I was unable to access the Vatican Apostolic Archive due to COVID lockdowns and restrictions. I was consoled by the fact that the Archives of the Congregation of the Eastern Churches and the Secretariat of State (Second Section) found a place for me. At the beginning of 2021, I visited ARSI, the Jesuit General Archives, and received bookings for the Vatican Apostolic Archive through to its summer closure, at the end of June.

What follows is a selection of some of the most interesting finds, some of which have or will be turned into individual articles, or have been included in ongoing projects:

1917: After the disestablishment of the Russian Orthodox Church and its well-funded international missions, several priests petitioned Bishop Nykyta Budka to become Greek-Catholics. Panteleimon Bozyk, author of the famous polemical history, Churches of the Ukrainians in Canada, was received in 1924. Father Stefan Oliynyk’s father, who had been the Orthodox priest in Smoky Lake, Alberta, was received in 1946. Their sons, Vladimir Bozyk and Gregory Oliynyk, became priests of the Archeparchy of Winnipeg. Upon his passing, Monsignor Vladimir Bozyk bequeathed a substantial grant for the use of Ukrainian Catholic education.

1917 August: Metropolitan Sheptytsky wrote to General Superior, Father Włodzimierz Ledóchowski, proposing that the Jesuits set-up a Byzantine-Rite branch. This was implemented a few years later. During the Second World War, missionaries Jerzy Moskwa, Viktor Novikov, Walter Ciszek, Pietro Leoni and others sent reports to the Jesuit Generalate. By 1957, a conflict arose between veteran missionaries and the younger professors in Rome, over how “native” the Russicum had gone in its attitude towards Russian Orthodoxy. This gave rise to a conflict between dicasteries of the Roman Curia.

1922 March: Bishop Budka interceded for the Yorkton Redemptorists in a conflict with the Brothers of Christian Schools, who were administering St Joseph’s College in Yorkton, Saskatchewan. The conflict threatened to shut down the entire Eastern-Rite Redemptorist apostolate in Canada, which Budka said would be a disaster for the Ukrainian Greek-Catholic Church.

1942: Bishop Ivan Buchko brought Father Myroslav Ivan Lubachivsky to Rome from Switzerland, for specialized biblical studies. The published index of the Nunciature in Italy lists him as "of Polish nationality," without further qualification.

1940–1950: In London, England, Vladimir de Korostovets and Danylo Skoropadsky informed the Aposotlic Delegate on Ukrainian issues. The result was that Archbishop William Godfrey was informed and well disposed to Ukrainian DPs and helped establish the UGCC in Britain. Godfrey also intervened vigorously with the Home Office to stop them being deported. A decade later, he was well prepared to accept the mantle of Apostolic Exarch for Greek-Catholics.

1943 December: Apostolic Delegate Antoniutti gave a dispensation to Martin Thomas Demetrius Greschuk to become an eparchial seminarian, since he had been a novice with the Brothers of Christian Schools. Greschuk went on to become auxiliary bishop and later eparch of Edmonton, Canada.

1945 July 12: Danylo Skoropadsky wrote to his mother on learning of his father Pavlo’s death. The letter was entrusted to Apostolic Delegate Godfrey in London, but does not seem to have been sent.

1947–1950: Vladimir de Korostovets intervened with the Apostolic Delegate in London, and the Nuncios in Ireland and Vienna, until he was able to secure the repatriation of Gertrud von Habsburg and her children Claudia and Maximillian. They were accompanied by de Korostovets’s wife Alexandra (Ara) to safety in England and Ireland. They had been living in fear after the kidnapping and deportation of Wilhelm von Habsburg (Vasyl Vyshyvany) in August 1947.

1948 January: Rumours that HM Government was considering Catholic bishops to be members of the House of Lords. Cardinal Griffin and Archbishop Godfrey thought it might lay the hierarchy open to political partisanship. Pius XII and the Secretariat of State maintained an open attitude, awaiting a concrete proposal which never materialized.

1948   Retirement of W.L. Mackenzie-King and succession of Louis St Laurent as PM of Canada. Constitutional evolution was taking place with the Canadianization of the monarchy, and projects for a Canadian flag and anthem. Diplomatic relations between Canada and the Holy See were not initiated by the Catholic PM, who feared it would further divide the country, due to ongoing Protestant prejudice.

1949 April: After Newfoundland joined Canada, the Apostolic Delegate suggested reducing the number of Anglophone ecclesiastical provinces, placing the Archdiocese of Winnipeg under the historic Metropolitan See of St. Boniface. The previous year, the single Ukrainian Exarchate had been reorganized and divided in three. It became a metropolitan ecclesiastical province of its own in 1956.

1949: MP Jean Lesage made a speech in Parliament on the proposed UN declaration of Human Rights. He repeated MP Pinard’s statement that all rights and liberties come from God, which is based on the healthy philosophy of Saint Thomas Aquinas. “This remains the Christian foundation of the principles of our democracy.”

1950: Archbishop Ladyka’s health began to deteriorate and he spent many months at Mundare Hospital in 1942, 1945, 1950. He received auxiliary bishops in 1943 and 1948. In 1950, his Mundare advisors convinced him to petition for Bishop Savaryn to be appointed administrator. Instead, Father Maxim Hermaniuk was named auxiliary bishop, vicar general, and later apostolic administrator and eventually his successor.

1951 June: the episcopal consecration of Maxim Hermaniuk took place during a Congress in Winnipeg which had been posponed the previous year due to the Winnipeg Flood. The packed weekend included the opening of the new Cathedral of Saints Volodymyr and Olha. The event were attended by over 7,000.

1951 November: Princess Elizabeth left Canada for USA as “Princess of Canada.” In Washington D.C., She received the US President not at the British but at the Canadian Embassy. At Her accession the following year, Elizabeth was the first sovereign to be proclaimed “Queen of Canada.” Other former dominions (realms) followed suit.

1953: The OSBM General Chapter agreed to found a minor seminary for the 4 Canadian exarchates in Edmonton for 100 students, grades 7-12. The project was cancelled due to a conflict with Bishop Savaryn. The Ukrainian Redemptorists established the minor seminary in Roblin, Manitoba, and the Basilians opened a high school in Toronto.

1954 October 6: Cardinal Griffin declared that “the Wembley pageant and crowning [Marian Year] was one of the greatest functions held in this country since the reformation.”

1955 March: Cardinal Griffin considered issuing a statement when the UK had decided to manufacture the hydrogen bomb. This was in line with Pius XII's discourse to the Eighth Assembly of the World Medical Association. He also hoped to enlist the Scottish, Irish, and Australian Catholic Hierarchies. During the war, he had attempted to issue a joint statement with the American bishops against indiscriminate bombing, but Cardinal Spellman replied: "For views on bombing, see my book, Action this Day." On Sunday, 13 March, British bishops delivered sermons in their cathedrals on the Basis of Peace, cautioning against nuclear weapons.

1956 May: Ronald Knox had once been proposed as a titular bishop by Cardinal Griffin. In 1952, an enthusiastic layman proposed he be named cardinal. In May 1956, Apostolic Delegate O’Hara suggested Knox again but Griffin said he could not take the responsibilities of an auxiliary bishop, as he preferred a private life of scholarship. Instead, the Cardinal asked for Monsignor Derek Worlock, but the process was never completed due to Griffin’s untimely death, in August of the same year.

1958 September 15: Pius XII consented to have the Ukrainian Bandurist Capella, on tour in western Europe, perform before him at Castel Gandolfo. The majority of its members were Orthodox Christians who had been forced to flee Stalin’s utopia. In the meantime, the Pontiff died.