"I am pleased to announce that Bishop Nykyta Budka's story will be told in greater detail and authority in a soon to be published biography researched and written by Rev. Dr. Athanasius McVay, a church historian and priest of our Eparchy of Edmonton."
– Bishop David Motiuk, Greeting to Patriarch Sviatoslav (Shevchuk) on the 100th Anniversary of Budka's appointment

The upcoming biography of an historical record and analysis of the life and ministry of Nykyta (Nicetas) Budka, the first Ukrainian Greek-Catholic bishop of Canada. It is not a popular biography nor a hagiography (lives of the saints).

What to look for in the Budka Biography:

Little known or forgotten details about the life and work of Nykyta Budka including:
- Details about his early years in Austrian Galicia (Western Ukraine).
- Accounts from his seminary years in Lviv and graduate studies in Innsbruck and Vienna.
- A in-depth analysis of the selection process of Greek-Catholic bishops in 1912.
- details about other candidates for the Canadian mission.
- Budka's ordination, journey to Canada and first accomplishments in his new charge.
- Financial and administrative challenges, the newspaper and student residences.
- Franco-Canadian missionaries, Ukrainian Basilians, Redemptorists and secular clergy.
- Sisters, schools, seminary training, building new churches
- Challenges in maintaining the faith of his flock, religious proselytism.
- Religious conflict within the Ukrainian Canadian community.
- The Bishop's activities during the First World War and its immediate aftermath.

- English translations of Budka's official reports to the Apostolic See of Rome, & other correspondence.
- Details regarding the Bishop's heath and resignation. Candidates to succeed him. 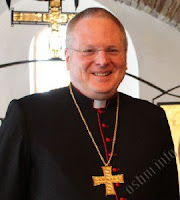 His Excellency, Archbishop Thomas Gulickson, Apostolic Nuncio to Ukraine, has posted the following review of our Holodomor book on his web blog:


Living and Dealing with Regimes: The Holy See and The Holodomor...


Through the kindness of Rev. Peter Galadza, PhD, Kule Family Professor of Eastern Christian Liturgy at Saint Paul University, Ottawa, Canada, I just received a copy of this important little tome. As all of the source material is translated into English, it is destined to a broad reading audience. With notes and all not reaching 100 pages, I would think that no history professor should hesitate to put it on the reading list of any serious course in 20th Century European History.


In preparation for my own mission as Apostolic Nuncio here in Ukraine, I had read another book actually describing the drama of this famine through the eyes of a young boy who survived: "Execution by Hunger, The Hidden Holocaust, by Miron Dolot, W.W. Norton Company, New York, 1987" (Kindle Edition). For this reason, the samples of anonymous letters describing the Holodomor which reached Pope Pius XI sounded terribly familiar. More of our world needs to know and understand. I fear that without such lessons we may be all too inclined not to wish to face the reality that there are people "on top of the heap" who care little for human life or common decency and who seem to be able to surround themselves with a surplus of henchmen to carry out their diabolical designs. The expression "They will stop at nothing" takes on real content and terrible sense in the light of this act of genocide.


Why the Holodomor? In her Afterword to the book Laura Pettinaroli captures it well as being a part of Stalin's plan to obtain hard currency from the sale of grain for the industrialization of his empire. In a year of abundant harvest, all was taken for sale abroad. Nothing was left for the mouths of the peasants who had produced the bounty and so they died of starvation by the millions. That year's was not a poor harvest.


The analysis offered by the editors in their introduction to the documentation is a marvelous piece of scholarship which provides perspective on the possibilities for exercising its moral authority open to the Holy See through diplomacy. (source)
Posted by Rev. Dr Athanasius D. McVay, HED, FRSA at 08:43 No comments: