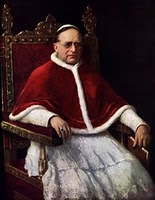 Despite the deep reservations of his flock, Metropolitan Andrei Sheptytsky greeted the election of Achille Ratti as Pope Pius XI with optimism and hope.  The two churchmen’s paths had first crossed in 1918, with Ratti’s appointment as papal envoy to Poland,  Russia and Ukraine. During that mission, Ratti’s ambivalence towards their independence struggle caused Ukrainian patriots to be wary of the new pope’s intentions.  True to form, in his battle against nationalism, Pius XI demanded that his ministers place stringent limits on the nationally conscious Ukrainian Greek-Catholic Church. By analogy, during Pius XI’s pontificate, the Apostolic See’s relationship with the Ukrainian nation can be seen through the Roman Curia’s relations with Metropolitan Sheptytsky, the Ukrainian Catholic primate.  [...]

Andrei Sheptytsky served as metropolitan under five popes, three secretaries of state, three prefects of the Propaganda for Oriental Affairs and another four of its successor the Oriental Congregation.  His relationship with each Pope and with each dicastery differed according to the needs of his Church, the individual policies of each pontiff and those of his officials.  Roman Curia’s ultimate verdict of Sheptytsky was undoubtedly positive.  In particular, its oriental dicastery recognized his constant fidelity and zeal amidst persecutions and hindrances, declaring him a confessor of the Faith for the Union of the Orient with the Roman Apostolic See.  While falling short of completely restoring the powers granted by Pius X,  Pius XII entrusted the entire Catholic mission in the Soviet Union to Sheptytsky’s care.  Following Kyr Andrei’s death, the same pontiff publicly manifested his esteem in two magisterial pronouncements. Although Sheptytsky’s beatification has been inordinately delayed, his name continues to appear in significant acts of the papal Magisterium into the third millennium.