A Vatican Memo, Sheptytsky, and the Holocaust

Recently, a German scholar, Hubert Wolf, gave a "spoiler" interview in which he spoke of previously unearthed documents from Vatican archival collections of 1939–1958, which had been opened briefly this past March. I myself had an opportunity to view some of the newly available files before Italy and the Vatican shut down, due to the Coronavirus quarantine.

Wolf singled out a memo, penned by a Vatican functionary, regarding a request from the American Government to help confirm the veracity of reports of the Nazi Holocaust against the Jewish People. The memo also mentions parallel reports from the Greek-Catholic Archbishop of Lviv, Metropolitan Andrey Sheptytsky.

As background, Wolf cited a letter that Sheptytsky had written to Pope Pius XII in August 1942. He also made conjectures about the historical significance of the memo. Other journalists picked up his remarks and produced clamorous and sensationalist pieces presenting Wolf's theories as conclusive facts. This "fake news" is now makings its rounds in the Ukrainian press. Some reporters did not refer back to the original interview and assumed that Wolf also claimed to have discovered Sheptytsky's 1942 letter. This is not the case.
With over 20 years experience of research in various Vatican collections, I usually notice when something is amiss in reports about those archives. The clearest explanation of the memo's context is offered by Matteo Luigi Napoletano, in his article about the way research should done among newly-opened Vatican files (the English translation is not the best). Napoletano provides the precise archival citation of  Monsignor Angelo Dell'Acqua's internal memo, dated 3 October 1942: Secretariat of State Archives, Affari Ecclesiastici Straordinari [AES], period V, Germania Extracta, position 742, folio 25. Since Napoletano's English translation is awkward, I offer my own rendering here:

No doubt the news contained in the letter by Ambassador Taylor is very serious. But the need arises to ascertain that they correspond to truth, since exaggeration is easy even among Jews. It’s not enough, in my humble opinion, to base it upon information given by the Ruthenian Catholic Metropolitan-Archbishop of Lviv and on Signor Malvezzi (even Orientals are not an example in matters of sincerity). But if we accept the news as true, it would be appropriate to proceed with great prudence in confirming it to Mr. Tittmann, since I also sense something political (if not purely political) in the American Government's initiative. This would bring publicity in the event of confirmation by the Holy See. And that could cause unpleasant consequences, not only for the Holy See but also for the Jews themselves who are into hands of the Germans, and who could be subject to an increase in the hateful and barbaric measures adopted against them. 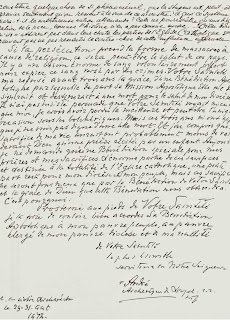 The information given by "the Ruthenian Catholic Metropolitan-Archbishop of Lviv" refers to a letter of Sheptytsky addressed to Pope Pius XII, dated 29–31 August 1942. Rather than a recent discovery, the document was published 53 years ago in the collections Actes et Documents du Saint-Siège [ADSS], vol. 3/2, document no. 406, pages 625–629. There is a photograph of one of the pages of the handwritten document on page 628. A good English translation of this letter is available here.

The 29–30 August 1942 letter is perhaps the most informative of approximately 30 letters the Metropolitan wrote to Rome, during the Second World War. The majority of these were addressed to Cardinal Eugène Tisserant, head of the Vatican department responsible for the Eastern Churches (Sacred Congregation of the Eastern Church, as it was known at the time). Sheptytsky also addressed about seven letters to Pope Pius XII directly, and  a few others to the papal secretary of State, Cardinal Luigi Maglione. The Metropolitan also communicated with three other churchmen in Rome: he sent 30 letters to his auxiliary bishop, Ivan Buchko, at least four to the Jesuit General Superior, and three to Father Cyrille Korolevskij.

In subsequent letters to Bishop Buchko, Metropolitan Andrey explained why, previously, he had not provided more candid and detailed information. With his couriers being captured and arrested, Sheptytsky was reluctant to send details which could fall into the wrong hands, "even in Rome." That reference, from a letter dated 3 May 1943, likely refers to interception by Fascist agents, which were allied with the Hitler regime. This could also provide an explanation as to why a letter to the Pope dated March 1942 was never sent. It was likely superseded by the more detailed August report, dispatched when a reliable courier was found.

The memo's reference to "the Orientals" (Eastern Catholics and Orthodox) not being examples "in matters of sincerity" means that the curial official in question, Angelo Dell'Acqua, had some doubts about the veracity of the Metorpolitan's information. Why was that? While most inquiries focus on deciphering Dell'Acqua's remarks regarding Jewish sources, I would offer a brief explanation of the comments on Sheptytsky.

There are a number of distinct departments in the Papal bureaucracy (the Roman Curia). The most influential is the Secretariat of State, the head of which is like a prime minister to the Pope and a moderator of the whole curial system. Another department is the Congregation for the Eastern Churches or Oriental Congregation as it has been popularly known for almost a century. Each department has a different portfolio and a different view of Church affairs as well as matters that effect the Church from without. Each department vies for the Pope's ear and hopes that their their view of things will prevail and become Vatican policy.

One of the responsibilities of the State Secretariat is to attend to political matters and relations with sovereign entities. Thus it holds a somewhat political view. The Oriental Congregation is concerned with the wellbeing of the Eastern Churches, and thus holds a more Eastern view. In the early twentieth century, the State Secretariat relied on information sources such as the Polish Ambassador and the Polish-Latin hierarchs. They both represented the Polish view, which was antagonistic toward the Eastern Churches. Ukrainians had no diplomatic representative to present their views at the Vatican. It is no surprise then, that the State Secretariat was very suspicious of Andrey Sheptytsky. On he other hand, the Oriental Congregation, headed by the orientalist scholar Eugène Tisserant, understood and highly valued Sheptytsky's views and plans.

When it came to Sheptytsky, Pius XII gave his diplomatic Secretariat a hearing, but usually took the advice of his eastern expert, Tisserant. This was manifestly the case regarding Sheptytsky's two most beloved projects: the appointment of his successor and the creation of exarchates in the territories where they had been suppressed or hindered by antagonistic civil governments (especially Russia and Poland). In both cases Papa Pacelli approved to the Lviv Metropolitan's projects over the head of diplomatic objections from his State Department.

If the August 1942 letter tells us nothing that we have not already known for 50 years, there are other letters from Sheptytsky, not yet been made public, which refer to the situation in Ukraine and to the Holocaust. Below is an excerpt from his letter to Tisserant, dated 28 December 1942:

The terror is increasing. For the last two months they executed in Lviv, even without a trial, more than 70,000 Jews. […] Also the arrests continue. From day to day it is becoming clearer that this is aimed at the anahilation of all the intellectuals, both Ukrainians and Poles.


All the time there is more proof that they want to completely annihilate us. For example, a German supervisor of an interpreter (seminarian) working in Greater Ukraine admitted to him confidentially that the plan for the country is this: to leave only a half million people in all of Ukraine. And to his question, "what about the rest," he received the reply: "Well, that’s obvious..." And truly it is beomming more obvious every day. They place prisoners and workers under such conditions that it is abundantly clear that they intend for the majority to perish. Elderly folk, in various places, are afraid to ask for assistance, since those who ask are arrested and shot within the hour. Thus some old men that lived at the base of Saint George's in Lviv, were all gunned down. In villages and towns people are shot daily, not merely without any trial but also without any reason. The prison on Lącki (Lonsky) Street in Lviv constantly fills up but then empties out. They are taken away in vehicles to be killed somewhere else. In the last few days Father Kovch was arrested and some say that it is not over yet. In prisons and camps (the worst in Auschwitz where Diakiv is with many Banderites). You know about the fate of the Jews in Lviv. In the last two months about 60,000 perished. I don’t know when I’ll send that letter. The nuncio [Orsenigo] won’t accept them so perhaps the Order of Malta’s train.
Posted by Rev. Dr Athanasius D. McVay, HED, FRSA at 15:09 No comments: