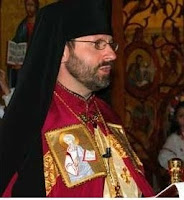 On 23 March, the Synod of the Hierarchy of the Ukrainian Greek-Catholic Church made history by electing 40-year-old Bishop Sviatoslav Shevchuk as Major-Archbishop (patriarch). The Apostolic See of Rome confirmed the election two days later, on the Feast of the Annunciation according to the Gregorian Calendar.
The choice of Kyr Shevchuk harkens back to that of Josyf Slipyj, Metropolitan Sheptytsky's chosen successor. Like Shevchuk, Slipyj was in his early forties when presented in 1937. He was also Shevchuk's predecessor as Rector of the Ukrainian Catholic seminary in Lviv. Both held doctorates in theology from Roman pontifical universities, Slipyj from the Gregorian and Shevchuk from the Angelicum. Despite their youth, both men were chosen over more experienced bishops due to their superior theological science and inspired vision. Both were secular priests who succeeded monastics: Metropolitan Sheptytsky was a Basilian and Cardinal Husar a Studite. Both Slipyj and Shevchuk were chosen over Redemptorist candidates. Pope Pius XI initially inclined to Sheptytsky's second choice, Bishop Charnetsky, and there were several prominent Redemptorist candidates at this past synod.
The similarity of Shevchuk's figure to that of his predecessor is evident in the following description by Sheptytsky, written in May 1937:
Among the priests of my diocese that I would name as distinguishing themselves by their virtue, their talents and their knowledge [...] the Rector of the Seminary and the Academy, Msgr. Joseph Slipyj. He is an initiator and an organizer, a man of wide views and of solid science, having always striven for knowledge and for the Seminary. He is little known by most of the people but the clergy esteems him much.
Hopefully Shevchuk will also make history by becoming the youngest member of the College of Cardinals. While this honour depends on Pope Benedict's personal decision, given Shevchuk's extreme youth it will probably not happen before 2013, when his immediate predecessor turns 80 and loses the right to vote in the Conclave. In addition to my conviction that our hierarchs made the best possible choice, I am personally overjoyed by this election because His Beatitude and I were born 30-days apart and were both theological students at the Angelicum from 1994 to 1995.
27 March 2011: Like his immediate predecessor, Cardinal Husar, Shevchuk is beginning to make history. Today he became the first Catholic primate of Kyiv-Halych:
— to be enthroned in the ancient capital of Kyiv since the Eighteenth century
— to be enthroned in the yet-incomplete Sobor (Arch-cathedral) of the Resurrection
— to have other Eastern Catholic Patriarchs and primates flanking him at the ceremony, notably Patriarch Gregorios III of Antioch and Slovak Metropolitan Ján Babjak.
— to have present at his enthronement representatives from all three Orthodox Churches of Ukraine.
See also "The Church is Young" on the webpage of the Pontifical Society of St. John Chrysostom.
Posted by Rev. Dr Athanasius D. McVay, HED, FRSA at 04:49

With your permission I would like to link to your posting from the Melkite Eparchy of Newton website. The Melkite Patriach has posted his "greetings" to the new Archbishop - and I think your article would nicely explain the importance of this event. MelkiteWeb@Aol.Com

I am a constant reader and true admirer of your blog. I mean it. :)

However, could you provide name(s) of our Primates enthroned in Kyiv after the Union...

I would very much like to see continuing coverage of Patriarch Sviatoslav's actions now that he's getting settled in. You know...in your spare time! LOL!

I added your blog to the Eastern and Oriental Catholic Web Ring: http://yourwordfromthewise.blogspot.com/p/links.html

I hope many more find you and subsequently the depth and breadth of the Church through it!