Unity and Universality upon English Shores

On Saturday, 21 March, Bishop Kenneth Nowakowski is enthroned as bishop of the Eparchy of the Holy Family of London. Although he is only the second eparch since the creation of a full eparchy in 2013, he is the seventh bishop to shepherd the Ukrainian Greek-Catholics of the United Kingdom.
Although Ukrainian Catholics began to settle in Britain around 1900, the Byzantine Catholic Church of the Kievan tradition (UGCC) was canonically established for them only in 1947, when Bishop Ivan Buchko was given jurisdiction over all the Ukrainian Catholic clergy and faithful scattered across western Europe, following the Second World War. He came to London on 4 January 1947 and, the following day, formally notified the local Catholic hierarchy of his charge. Raised to the rank of archbishop in 1953, Buchko held jurisdiction over Great Britain until the creation of an apostolic exarchate for England and Wales, in June 1957 (extended to the rest of the United Kingdom in 1967). And he continued as apostolic visitor over various parts of Europe until 1971.

Being too poor to build their own churches, Ukrainians relied on generous moral and financial support of the Roman Catholic hierarchs, parish priests, and organizations. Still, the English and Welsh bishops would have preferred to have the Ukrainians under a single Latin ecclesial structure. For this reason, a proposal for a separate Ukrainian bishopric was rejected in October 1954. In the face of resistance from the bishops, the project was salvaged due to the firm leadership of Cardinal Eugène Tisserant at the helm of the Vatican Congregation pro Ecclesia Orientali (renamed “of the Eastern Churches” after the Second Vatican Council).
With the eparchies suppressed in their homeland, Pope Pius XII had promised to restore the Ukrainian hierarchy in the diaspora, and Cardinal Tisserant helped find a way to keep that promise. Buchko was to be relieved of some of his responsibilities by the creation of individual apostolic exarchates for England, Germany, and France. Since the local hierarchs were reluctant to see a ‘foreigner,’ Tisserant asked the Archbishop of Westminster, Cardinal Bernard Griffin, to serve as first exarch. In April 1955, Griffin accepted and the English hierarchy gave their approval. However, Scotland was to be left under Archbishop Buchko, since it was considered inappropriate for an English archbishop to hold jurisdiction in that country. Pius XII approved the apostolic exarchate for England and Wales in June 1955.
Cardinal Tisserant had obtained what was possible for the moment. Once the Latin bishops got used to the structure, a Ukrainian bishop would be appointed. But knowing the strong nationalistic feelings of the Displaced Persons (DPs), Buchko worried that the faithful would not accept an English exarch unless a there was a Ukrainian priest or auxiliary bishop at his side. He suggested proceeding with an exarchate in Germany, but the search for suitable candidates led to the postponement of both projects. In the meantime, Cardinal Griffin died prematurely and his successor, Archbishop William Godfrey, had to be approached. Godfrey accepted on 2 May 1957 and the exarchate was  finally created on 10 June 1957 with the issuing of a papal bull, Quia Christus omnes.
The formal handover of the mission proved to be somewhat complicated. Buchko came to London, in August, to perform a final visitation and met with Godfrey to discuss the handover and appointment of a Ukrainian vicar-general, to run day-to-day affairs. Godfrey insisted that such a priest be from Canada, as a former British colony and member of the Commonwealth.
Buchko was adamant that Ukrainians witness the Latin and Byzantine hierarchies cooperating at a solemn liturgical ceremony. It had to take place in the tiny Ukrainian church in Saffron Hill, rather than at Westminster Cathedral, and the Byzantine Liturgy needed to be celebrated by a member of the Ukrainian Catholic hierarchy. Metropolitan Maxim Hermaniuk of Winnipeg was in London in September, but did not officiate because the ceremony was delayed: the papal bull did not arrive on time and Godfrey left for Ireland on his annual vacation. 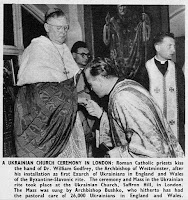 The problem was resolved when Cardinal Tisserant instructed Archbishop Buchko to return to London to preside. The ceremony took place on 10 November 1957, according to an order of service devised by Buchko and approved by Apostolic Delegate O’Hara. The newly-appointed exarch and the apostolic delegate were received at the entrance of the church by Buchko, who presided over a hierarchical Divine Liturgy concelebrated by Ukrainian priests. As exarch, Godfrey gave the blessings in Church Slavonic and assisted from a throne on the left side, while the apostolic delegate sat in a simpler throne on the right. The papal bull was read in Latin and Ukrainian. Buchko brought greetings from the Ukrainian hierarchy, the clergy made obeisance by kneeling and kissing the ring of the enthroned exarch. The ceremony concluded with the intonation of the liturgical prayer “God grant them many years” (Mnohaya lita) for Exarch Godfrey, Apostolic Delegate O’Hara, the imprisoned Metropolitan Yosyf Slipyi, and the Ukrainian hierarchy worldwide. Godfrey was accompanied by his two priest-secretaries and his courtly gentleman, Anthony Bartlett.
On 30 December 1957, Buchko replied to Godfrey’s letter of thanks, assuring him that he conserved beautiful memories of that solemnity which will be surely noted in the pages of the history, not only of the Ukrainian Catholic Church but also those of the Universal Church, during which unity and universality were magnificently resplendent upon English shores.
All of Godfrey’s successors held proper enthronement ceremonies, which involved being ritually lifted into their throne and receiving a Byzantine crozier. Each ceremony was slightly different and, as with the first bishop’s, encountered some difficulties in the planning and execution.
Bishop Hornyak, the second exarch, was scheduled to be enthroned on 6 June 1963. Pope John XXIII died three days before. Rather than postpone, some adjustments were made. Westminster Diocese was represented by the Capitular Vicar, Bishop Craven, as the see had been vacant since the death of Cardinal Godfrey. Hornyak was lifted into the throne and given the pastoral crozier by Apostolic Delegate O’Hara. However, as a sign of mourning, the clergy wore red and the exarch wore a red omophorion. Following the Divine Liturgy, panakhyda was celebrated for the late pope.
On 12 May 1968, Bishop Hornyak was enthroned again, this time as apostolic exarch for Great Britain and Northern Ireland. The ceremony took place at the Ukrainian church of the Protection of the Mother of God and Saint Andrew, in Edinburgh. It was performed by Apostolic Delegate Igino Cardinale and attended by the Scottish Catholic hierarchy: Archbishop Gray of Edinburgh, Bishop Scanlon of Glasgow, and Bishop Hart of Dundee.
On 10 October 1989, the third exarch, Bishop Michael Kuchmiak, was the first to be enthroned at the Ukrainian Cathedral of the Holy Family in London. The rite was performed by the apostolic pro-nuncio, with Cardinal Basil Hume of Westminster assisting from a throne. On 16 June 2002, the fourth exarch, Paul Chomnycky, was enthroned by a Head of the Ukrainian Catholic Church, Cardinal Lubomyr Husar. Although several Ukrainian hierarchs came, neither the nuncio nor any of the Latin bishops were able to attend.
Upon his appointment as apostolic administrator in 2009, Bishop Hlib Lonchyna held an inaugural Divine Liturgy with Cardinal Husar and two English bishops assisting from the throne. After being confirmed as fifth exarch on 8 November 2011, Kyr Hlib was enthroned by the nuncio, Archbishop Mennini. Husar’s successor, His Beatitude Sviatoslav Shevchuk, presided at the hierarchical Liturgy concelebrated by several British bishops as well as Ukrainian, Belarusian, and Melkite Greek-Catholic and Latin clergy. Ecumenical representatives attended from Ukrainian Orthodox and Presbyterian Churches.


Due to the Coronavirus crisis, the date of Kyr Kenneth’s enthronement was brought forward. The ceremony itself was changed to a semi-private rite performed by the Archbishop of Westminster, Cardinal Vincent Nichols, standing in for His Beatitude Sviatoslav. His Eminence had previously attended significant Ukrainian celebrations, including the 2009 inauguration (when he was yet Bishop of Birmingham). Cardinal Nichols also invited His Beatitude and all the European Eastern Catholic bishops to celebrate an hierarchical Divine Liturgy at Westminster Cathedral, in 2017. This is the first Ukrainian inauguration/enthronement in Britain to be broadcast live, over the internet. A public celebration marking the beginning of the eparch’s ministry is being planned for a later date.
Posted by Rev. Dr Athanasius D. McVay, HED, FRSA at 14:00