The Warsaw Nunciature and the Lateran Pacts 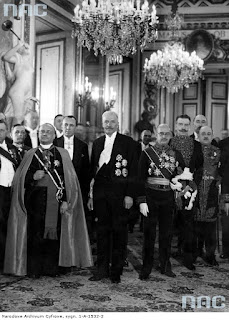 The following telegram was sent by Cardinal Pietro Gasparri to the apostolic nuncio in Warsaw, Archbishop Francesco Marmaggi:

no222- tomorrow thursday [you] will communicate [to the] diplomatic corps the following:

two years ago [the] italian governent confidentially expressed [a desire to] settle [the] roman question.

[the] holy father  asked all [the] cardinals who said [he] should not refuse such desire in comformity [with the] noted response [of] leo xiii.

private conferences [took place] for express conditions [of] his holiness [which] led [to the] stipulation not only [of a] treaty but also [of a] concordat to settle [the] italian religious [question].

both convenetions [are] inseperable [and their] signing [is] imminent.

[the] treaty ensures [to the] holy see essentially [the] arrangement always desired [: the] right to complete liberty [and] independence really necessary [to] govern [the] universal church.

[the] concordat sufficiently accounts [for the] religious situation [in] italy.