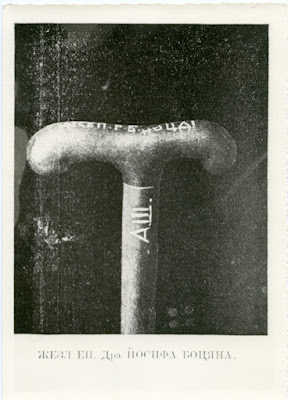 As I near the end of a research project, my friend and colleague Gloria Romaniuk, Archivist of the Ukrainian Catholic Archeparchy of Winnipeg, sent me a photo, for which I had been searching for a long time. It came from a collection belonging to the late Bishop Michael Hrynchyshyn, CSsR, longtime postulator of the cause of beatification of Metropolitan Andrey Sheptytsky.  He received the photo from Dr. Pavlo Senytsia, alumnus of the Ukrainian Greek-Catholic Theological Academy in Lviv, and editor of a multi-volume collection of articles regarding that institution. The second and third volume of this work, entitled "Світильник Істини" (Beacon of Truth) contains a partial reconstruction of the story of this famous cane. I have used these and other sources in my work on Sheptytsky, which includes articles regarding his apprenticeship of two priests, each of which, at one time, he looked upon as his successor. Each one of them was to receive this cane as a symbolic gift, in dramatic and perilous circumstances of the First and later of the Second World War.

Who did Metropolitan Andrey Sheptytsky look upon as his successor? Above all, he was looking for a someone who understood and was dedicated to his principal cause: promoting the union of the Orthodox Churches with Rome or, as he referred to it, “la Cause de l’Union.” During his long term as Metropolitan of Lviv-Halych, he considered several possibilities, among which was his own brother, Hieromonk Klymenti. However, above all others, two members of his clergy stood out for their moral and intellectual gifts, each of whom, at one time, the Metropolitan looked upon as a successor. Both men bore the same Christian name, Yosyf (Joseph). Both were chosen by Kyr Andrey to educate and form his clergy, as rector of his Major Seminary. Both were gifted academic theologians that had studied in Innsbruck and Vienna (and Rome). These men were Yosyf Botsian (1879–1926) and Yosyf Slipyi (1892–1984).

Father Botsian was the first to receive the cane, during the First World War, when he was accompanying Metropolitan Andrey to Kyiv. Sheptytsky had been arrested by Russian Imperial authorities, when they invaded Austrian Galicia and captured Lemberg (Lviv), in September 1914. He was deported to Kyiv and destined to spend the rest of the war in Russian confinement, at one point in a prison monastery for religious dissidents. The Tsarist authorities allowed three ecclesiastics to accompany him on the first part of his journey. These were Father Yosyf Botsian, the seminary rector, Father Dmytro Yaremko (1879–1915), the vice-rector, and Brother Yosyf Grodsky, the Metropolitan’s valet. They arrived in Kyiv and were confined at the city’s Hotel Continental.

In 1908, Kyr Sheptytsky had received special powers from Pope Pius X, confirming him as administrator of all Uniate eparchies that had been uncanonically suppressed by the Russian State, from 1772 to 1875. Among these powers was the right to ordain bishops for these dormant sees. After arriving in Kyiv, He spent several days in intense reflection and prayer. Fearing for the survival of the Greek-Catholic Church, Sheptytsky decided to make use of the special powers to ordain Botsian and Yaremko to the episcopacy. By virtue of the same faculties, he assigned them the suppressed bishoprics of Lutsk and Ostrih.

On 9/22 September 1914, Metropolitan Andrey told Yosyf Botsian to prepare himself to receive episcopal ordination the following day. The ordination took place in secret, on 10/23 September 1914, at the Hotel Continental. Kyr Andrey did not have all of proper vestments and sacred vessels, Thus, instead of the episcopal crozier, he presented Botsian with his walking staff, upon which he carved the following: “Д. І. Сеп. Р.Б. ≠ЦДІ А.Ш. И.Б” (On 10 day of September in the Year of the Lord 1914 Andrey Sheptytsky to Yosyf Botsian).” The newly consecrated bishops and Grodsky were permitted to return to Lviv, whereas Sheptytsky was deported to Nizhni Novgorod and thence to Kursk, Suzdal, and Jaroslavl, deep within European Russia. Kyr Andrey had the dubious fame of being the only Catholic bishop imprisoned during the First World War. While Petrograd claimed that this was necessary, due to evidence of political intrigue found during a search of the latter's papers, documents from Russian archives show that the decision to eliminate the Uniate leader was taken before the Tsar's armies invaded Austria-Hungary.

Botsian and Yaremko were deported to Siberia the following year. Yaremko did not survive his Siberian confinement, whereas Bostian’s health was ruined by it. Forced by illness to resign as rector in 1919, Botsian was never permitted to take possession of his eparchy. The Second Polish Republic, which had occupied Volyn and its capital Lutsk, imposed an invisible barrier (known as the Sokal Border) prohibiting Greek-Catholics from ministering east of the Lviv-Halych Metropolia. Shortly before Kyr Botsian's untimely death, Father Slipyi, who had been made rector in 1925, invited him to move to the Lviv Seminary, while quarters at the canons’ residence near Saint George’s Archcathedral were being prepared. On 21 November 1926, Slipyi administered the Sacrament of Holy Anointing to Botsian, whom he discovered lifeless, sitting in a chair in the seminary corridor. The following day, Slipyi preached a farewell sermon. The the funeral, which was the largest that Lviv had witnessed in many years. Writing to the Nuncio tweek weeks later, Slipyi commented: “We all regret the death of Bishop Botsian, because it is a great loss for our Church and a weakening of its situation.”

In 1939, Yosyf Slipyi began his own episcopal ministry as a clandestine bishop. Like Botsian, his nomination remained secret for just a little over two years and did not appear in any official church publication. After sending a personal courier to Rome, Metropolitan Andrey received word indicating that that Pope Pius XII had acceded to his request for a successor. In a letter, written in code, Cardinal Eugène Tisserant told the Metropolitan: “you may consider Your beloved disciple to be Your coadjutor and successor. You may proceed to make him such with the necessary function.” In other words, he could go ahead with the episcopal consecration. Describing the ceremony, Slipyi later wrote to a friend in Switzerland:

In place of a bishop’s crozier I received the Metropolitan’s wooden walking staff which, already once in Kyiv, he had given to Bishop Yosyf Botsian, of blessed memory, as a shepherds crozier, and also the same episcopal ring and the same hieratikon [that he had give Botsian]. These items had been rescued, in a very mysterious way, before the Bolsheviks destroyed the Major Seminary. In this, I specifically perceived the hand of Divine Providence.

Metropolitan Andrey intended this deliberate gesture to contain various layers of meaning: it symbolized that Slipyi was following in Botsian’s footsteps as Sheptytsky’s chosen successor; it also signified that, as Botsian had been consecrated secretly in emergency circumstances, so too Slipyi was being called to exercise his episcopal ministry in hardship and peril. This symbolic act was a clear indication that the “torch” had (literally) been passed from Botsian to Slipyi.

In a letter to Pope Benedixt XV in 1917, Sheptytsky had himself observed that it was that very Hand of Divine Providence which had freed him and Bostian from Siberia and brought down the mighty colossus, which had held the Uniate Churches captive for centuries. However, Providence also decreed that Slipyi was destined to share in many aspects of his predecessors’ fates. After having served 8 years in prison, he was exiled to Yenissey and Krasnoyarsk in Siberia where, almost forty years before, Bishop Botsian had been held. Following eighteen years in the Gulag, upon his elevation to the sacra porpora in 1965, Cardinal Yosyf Slipyi paid tribute to the earlier Father Yosyf who, but by the same mysterious Providence, might have taken his place as Metropolitan Andrey’s successor.

Thanks for one marvelous posting! I enjoyed reading it; you are a great author. I will make sure to bookmark your blog and may come back someday. I want to encourage

that you continue your great posts, have a nice weekend!