The Bishop Budka biography was publicly announced by Bishop David Motiuk on 12 June 2012. This anticipated announcement was made even though the work was not completed, in order to coincide with the official celebration of the Budka centenary which, in turn, was made to coincide with Patriarch Sviatoslav's pastoral visit to Canada. Since then, the centenaries of Budka's nomination (15 July), ordination (14 October), arrival in Canada (6 December), and enthronement (22 December) have come and gone. Nevertheless Budka celebrations are continuing throughout 2013, to commemorate the first steps of his Canadian mission. Some of those events can be found on the Budka website. Below is is a brief summary of the stages involved in producing this thoroughly researched biography:

- July 2008: the Edmonton Eparchy commissioned a research paper/small booklet on the history of Nykyta Budka's nomination to Canada.
- 2009: The Ukrainian Catholic Bishops of Canada asked for the project to be expanded into a full biography.
- A team of historians from the Ukrainian Catholic University in Lviv (UKU) was brought on board the project to provide materials from Budka's early and later life, before and after his mission in Canada.

- 2009–2011: the author performed intense research in seven Vatican and Canadian archives.
- 2011–2012: a draft of a full biography was composed in eight chapters. Materials from UKU were translated and thoroughly reworked.
- April —July 2012: first draft of the book was corrected and edited by six linguists, scholars. historians, church advisors and editors.

- July 2012: The Metropolitan Sheptytsky Institute was asked to co-publish the work. As part of their procedure, they submitted the draft to three scholars specialized in Ukrainian Canadian history.
- August 2012: UKU historians provided clarifications of their contribution and further material.
- September—October 2012: The three Canadian scholars submitted their comments on the first draft to Sheptytsky Institute, which approved the publication.
- November—December 2012. The first draft was thoroughly edited according to the scholars' submissions.

- A second draft of the biography was completed in December 2012.
- A title was chosen for the book, God's Martyr, History's Witness: Blessed Nykyta Budka, the First Ukrainian Greek-Catholic Bishop of Canada.
- A foreword was contributed by Dr. Stella Hryniuk, the first scholar to treat Budka from an historical perspective in the 1980s. 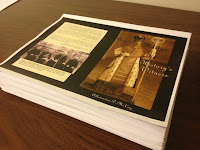