A Greek-Catholic Bishop Returns to Lutsk 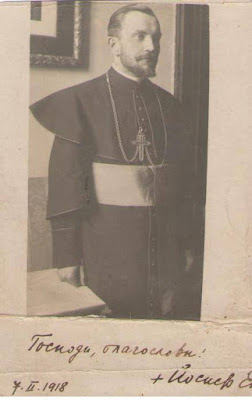 On 15 January 2008, after one-hundred and eighty years, a Greek-Catholic bishop was finally appointed to reside in the city of Lutsk, Ukraine. This event one of great historical significance and of justice for our Church, after having been deprived of an church structure in the region for so many years. The debate over the Greek-Catholic Church of Lutsk continued throughout the previous century and Bishop Josaphat Hovera joins a long line of illustrious predecessors, many of whom were confessors of Catholic unity amidst great persecution.

The eparchy of Lutsk-Ostrih dates from about 1326 and was one of sufragen sees of the metropolia of Kyiv-Halych. Being a prominent eparchy, over the centuries, several of Lutsk’s bishops were promoted to metropolitan of Kyiv. In 1589, during a pastoral visit, the patriarch of Constantinople named Lutsk’s bishop Kyryl Terletsky as his exarch for the entire Kyivan metropolia. Six years later, Terletsky would be one of two bishops sent to Rome to reestablish full communion between the Kyivan and the Roman Churches. The following year, in 1596, this act was confirmed by all but two of the hierarchy, and is is referred to as the Union of Brest, the birth of the Uniate (later renamed Greek-Catholic) Church.

From 1609 to 1702, four bishops occupied the see of Lutsk, which consisted of about one-hundred parishes in union with Rome. Despite the fact that Polish King Wladyslaw IV had given the eparchial properties to the Orthodox, Bishop Zabokrytsky accepted union with Rome in 1702, and was consequently imprisoned by the Russian Tsar, dying ten years later in Siberia. After him, there were eleven more uniate eparchs of Lutsk. Following the partition of Poland (1772-1795), Lutsk was one of the three Greek-Catholic eparchies preserved in the Russian Empire. However, in 1828, Bishop Syrotynsky had to flee when the Tsarist government unilaterally abolished his eparchy as a prelude to the violent suppression all Greek-Catholic structures in Russia.

As far as the Apostolic See was concerned, any attempt by the civil authority to abolish a diocese was invalid. However, no new Greek-Catholic bishop would thenceforth be permitted to occupy the see of Lutsk, which the official Vatican publication the Gerarchia Cattolica continued to list as vacant. In 1873, however, the notation concerning this eparchy vanished from the Gerarchia even though it had never been suppressed by a church decree. This fact was evidenced, in the 1920s, through a diligent search of the Vatican archives by the scholarly Monsignor Angelo Mercati, future Cardinal-Librarian-Archivist of the Holy Roman Church.
After the Russian Revolution of 1905, Tsar Nicholas II issued an edict which temporarily permitted a degree of religious freedom within his domains. Some former Greek-Catholics sought to return to their Church but were hindered by the lack of clergy and church buildings at their disposal, and so adopted the Latin Rite as the only viable option. The possibility of freedom for the Greek-Catholic Church would resurface during the First World War when Austria occupied the province of Volyn. In 1916, about fifty Greek-Catholic priests from Austrian Galicia were sent to minister to the Ukrainians of that region. Their arrival, however, was preceded by an extraordinary occurance.

Following upon the opportunity presented by the Tsar’s Edict of Religious Tolerance, in 1907, Pope Pius X granted Metropolitan Andrei Sheptytsky secret powers over the entire Eastern-Catholic mission in Russia. These powers included the right to ordain and install bishops, in special circumstances. The Russians invaded Lviv in 1914 and arrested the Metropolitan, deporting him to Siberia. Making use of these extraordinary faculties, Sheptytsky ordained to the episcopacy the rector of the Lviv seminary, his close collaborator Josyf Botsian, conferring on him the designation “bishop of Lutsk”. Upon Sheptytsky’s release from prison, on 18 August 1917, he immediately asked Pius X’s sucessor, Benedict XV, to confirm the nomination. The Metropolitan would have to wait just over three years for this confirmation as his planned visit to the pope was blocked by the Italian government, which was at war with Austria-Hungary. In the meantime, he assigned Botsian to minister to oversee the Greek-Catholic missions in Ukrainian territories occupied by Austria and Germany.

Though Metropolitan Andrei had informed Austrian officials, the Latin Bishop of Lutsk-Zhytomyr objected to Botsian’s mission because no Greek-Catholic bishop or diocese of Lutsk existed, at least according to the Annuario Pontificio (the Gerarchia Cattolica's sucessor). The Polish clergy feared that, instead of bringing the Orthodox into union with Rome, Botsian and his priests would entice the former Greek-Catholics to leave the Latin Rite. They also feared that the scope of the mission included support for Ukrainian as opposed to Polish sovereignty over Volyn. After the defeat of Austria, the Polish Republic took control of the region and Kyr Botsian’s title as bishop of Lutsk provoked to a political conflict, since his mission ran counter to Poland’s policy of assimilation of the local Ukrainian population. The Polish government considered it their right to approve episcopal appointments, a privilege which had been conceded to the Austrian emperor. Many Poles saw Botsian’s appointment as a sign of Holy See’s sympathy for the Galician Ukrainians’ quest for independence. Polish politicians requested official clarification regarding the papal confirmation of Botsian’s ordination, which had occurred on 24 February 1921. They accused Metropolitan Sheptytsky of furnishing the Holy See with false information regarding the ordination and even attacked the papal nuncio Achille Ratti (the future Pope Pius XI), on the pretext of his presumed pro-Ukrainian sympathies. These concerns were brought before the papal secretary of state, Cardinal Gasparri, by the Polish legate Dr. Wiernz-Kowalski.

Once Gasparri had obtained a report from the Oriental Congregation, he replied to the legate on 26 June 1921, that Botsian’s ordination “was made by Monsignor Sheptytsky on his own personal initiative, in lieu of the faculties accorded him by the Holy Father Pius X. Since the aforementioned Monsignor acted in virtue of such faculties, the nomination made by him is to be regarded as valid, and consequently the present Pontiff could not have done otherwise than to accept it. Nevertheless, His Holiness did not refrain, precisely in view of the special circumstances, to give the order that Monsignor Botsian would not perform any act of jurisdiction.”
Wiernz-Kowalski recognized this declaration as sufficient and the Holy See considered the Botsian affair concluded. In reality, however, the Polish government was still not satisfied and installed a new legate to the Vatican, Count Skrzynski, to pursue a more aggressive policy. The Oriental Congregation had to issue a clarification to the new nuncio to Poland, stating that the nomination to Lutsk was made before the existence of an independent Polish state, and further that, in virtue of the Union of Brest, the Holy See recognized the Ukrainian primate’s right to directly nominate and consecrate his suffragen bishops. At the beginning of 1922, Monsignor Skirmunt, liason between the Polish hierarchy and the Roman Curia, attempted to have Bishop Botsian’s granted a completely new title, since the Polish government was even opposed to Botsian being titular bishop of Lutsk. Skirmunt’s plan, however, involved keeping the change secret from the Oriental Congregation which, two months later, submitted Bishop Botsian’s name for the Annuario Pontificio, with the title “Bishop of Lutsk”. The publication of the 1922 Annuario caused a political incident making it appear as if Holy See had gone back on its promise that Bishop Botsian would not exercise episcopal jurisdiction. The Annuario was prompted re-issued with Botsian’s name removed.

Meanwhile, Metropolitan Andrei asked Botsian to reside in Pidhirtsi, within the pre 1784 boundaries of the see of Lutsk. The Holy See continued to look for a resolution and, even as late as 1924, Cardinal Gasparri inquired about the possibility of allowing Botsian to exercise jurisdiction in the Lutsk area. Since this solution was still not acceptable to the Polish regime, after the signing of the 1925 concordat with Poland, Pius XI decided to appoint Botsian auxiliary-bishop of Lviv. Sheptytsky and Bostian declared their unwavering loyalty to the papal will but furiously protested Botsian's renunciation of the Lutsk if it meant the effevtive suppression (once again) of the eparchy. In the end, the Pope appointed Botsian auxiliary of Lviv without changing his original title. As Gasparri wrote privately to Sheptytsky, as to his auxiliary's titular see "nihil innovetur". Most of his battles fought and lost, Botsian died, broken-hearted in 1926.

Not to be outdone by exaggerated nationalism, Pius XI blessed a project which came to be known as the Neo Unia. Polish church and lay notables had been suggesting that Eastern Catholicism was being used as a tool for Ukrainian nationalism. The Neo Unia sought to internationalize the mission in Volyn by conceding it to the Jesuits, thus attempting to separate religious and national-political issues. The Neo Unia, however, ended in failure. More successful was the mission of the Eastern-Rite Redemptorists in Volyn, initiated in 1926, the year of Bishop Botsian’s death. Five years later, their superior, Mykola Charnetsky, was named bishop and apostolic visitor to Byzantine-Rite faithful of the region. When Poland was occupied in 1939, Metropolitan Sheptytsky once again used his special powers to name Charnetysky exarch of Volyn, but the latter was never permitted to exercise that mission. After the Soviets retook Eastern Galicia, he and his fellow Greek-Catholic bishops were arrested, most dying in exile. After serving time in the gulag, Bishop Charnetysky was permitted to return to Lviv where he died in 1959. That same year, a priest who had been ordained by Bishop Botsian, Redemptorist Vasyl Velychkovsky, was clandestinely named exarch of Lutsk by Sheptytsky’s sucessor, Metropolitan Josyf Slipyj. Slypyj was not able to ordain Velychkovsky a bishop until 1963, when both met briefly in a Moscow hotel, just before Slipyj was to be exiled from the Soviet Union. Velychkovsky had already shared Slipyj’s fate of prison and torture and would follow him into exile in 1972. Both Bishops Charnetsky and his sucessor Velychkovsky were beatified by the Servant of God John Paul II in 2001.

After the fall of the Soviet Union, the Latin Church structure in Lutsk was restored and began to flourish. Unfortunately, the local Greek-Catholic community was not able to organize itself at the same level. The establishment of the archiepiscopal exarchate is a highly historic move, as it is the first time since 1828 that the Apostolic See has been free to confirm a Greek-Catholic primate’s nomination of a bishop for Volyn. Being a missionary diocese, an exarchate is a first step to the long-awaited restoration of the ancient Ukrainian Catholic bishopric of Lutsk.
Posted by Rev. Dr Athanasius D. McVay, HED, FRSA at 03:31