The Mystery of Father Damascene Polivka

Founder of the Ukrainian Church in Winnipeg 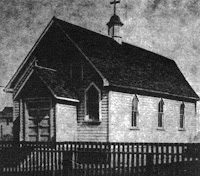 And what about the church congregation that Polivka helped found?  In 1901, two years after his departure from Winnipeg, a tiny chapel dedicated to St. Nicholas was constructed on property acquired by the committee. Historical sources demonstrate that the congregation identified itself as Greek-Catholic, even though they did not accept Archbishop Langevin’s jurisdiction.  Despite this fact, clergy of various religious allegiances were permitted to use the chapel until the arrival of two Basilian Fathers in November 1903.  At that time, the congregation asked the Basilians to assume the direction of their church.  Archbishop Langevin paid for the construction of a larger temple (velyka tservka) which was opened in January 1905 and located directly across the street from the original chapel.
But not all segments of that single Ukrainian congregation agreed with the Basilians, nor did they like the fact that their church had been brought under the authority of the Latin archbishop.  Consequently, part of the congregation left to found Holy Trinity Russian Orthodox Cathedral, which was consecrated by future Russian Orthodox Patriarch St. Tikhon in 1905.  Two years later, in 1907, a more nationalistic portion returned to the first tiny chapel (mala tserkva) and renamed it Sts. Vladimir and Olga, the future Ukrainian Catholic cathedral.  Another part of the flock formed the Greek-Independent Church and in 1917, a further segment helped create the Ukrainian Greek-Orthodox Church of Canada.
The Basilians were far from alone in attempting to "remake" history.  In 1936, Father Vasyl Kushnir, the parish priest of Sts. Vladimir and Olga, published a commemorative Almanach that contains a fictional account of the beginings of his parish.  Orthodox publications went so far as to claim that the first church was not even Catholic or that the Uniates separated later.  It seemed to have been important that each successor church lay exclusive claim to the first church, just as their brethren in Ukraine fought over Hagia Sophia in Kyiv.  What is certain is that many if not all of the leaders of these churches were part of the original St. Nicholas congregation, co-founded and served by the mysterious missionary, the Bohemian-Slovak Greek-Catholic onetime Basilian Father Damascene Adalbert Francisk Polivka.
Posted by Rev. Dr Athanasius D. McVay, HED, FRSA at 01:26

Dear Athanasius,
Hi, after a long time. I am Ruben, the argentinian student at the Angelicum and friend of don Francisco. It is nice to hear from you again. I am right know in Oxford as visiting research fellow.
Drop me a mail: rpereto@gmail.com

This is great work!

"Юрко Паніщак", a.k.a. "Юрко Панісько", ?brother-in-law? to Іwan Pylypow; apparently, he was supposed to leave with fellow villagers Pylypow and Eleniak on that legendary 'first trip' to Canada, but was turned back.
He came to Canada later and became a resident of Winnipeg, and became involved in key community issues over the years.

What an article! I have time to read page one at the moment, I will carry it with me until I have the chance to read all, top to bottom!

Your knowledge of the archival record, Father, is precious for us all! Thank you for that!

Mary Shipek's mother was Ann Polivka Shipek from Hostin u Vojkovic, also in the Czech Republic. Her father was Felix Shipek Their children were Elizabeth "Bessie", Anne, Lillian, Michael, John, and Mary Ann. She had a brother Charles Shipek, and his children were Charles, Lillian, Elizabeth, Ellen, Joe, and Edward. Michael Shimko and Mary Shipek were married 14 June, 1902 in St Nicholas Church in Duquesne, PA. Mary Shipek was a niece of Rev. Damascene Polivka from Bohemia, who served as the first pastor of "The First Slavish United St. Mary's Greek Rite Catholic Church" in Windber, PA from 1900 to 1904.
email: John Lesko - jlesko@dcez.com - Posted 15 September 1998
I found this looking for some of my relatives. j Lesko might be able to help you solve part of your mystery.
~Alan Polivka docdoc@earthlink.net
dated June 15, 2010

Mary Shipek is my Great Grandmother. John Lesko is my uncle. Rev. Damascene Polivka could be my Great-Great Uncle? Very interesting! I reside in Orange, CA. I am 38 years old. It is a small world after all :) ~Peace&Love